I must admit, I hit a bit of a rut and with Halloween season officially upon us, all I have been doing is absorbing campy horror movie after campy horror movie with little thought as to whether or not I would share them with you. Most of them I had seen already. Some of them are already on this blog. So, I was stuck.

I tried, though. I plowed through a lot of movies for last week and the week prior, and for the life of me nothing popped up and screamed for immortality on a blog no one reads. Then, I thought I could redeem myself and post a lengthy mirth-filled entry for Thursday, but still came up short. Then another Sunday came and went. I try not to review things I have already seen unless it is a last resort, consistent content be damned. Thus, the lack of updates for far too long.

However, in my pursuit of camp, I came across a bunch of flicks that, while not packed to the gills with details for me tear asunder for your merriment, a lot of the movie had flickers of genius that needed to be exalted. Not from on high, mind you, but enough above the ground for a few chuckleheads to dig into.

Some of these movies I screened with a group of tight-knit amigos ready for danger and fun. A lot of them were in the same crew that reviewed Uncle Sam. Their personal hang-ups and chicanery will not play a part in the reviews of those flicks, though as I wrote them I heard all the comments swirling in the back of my head.

The rest of the flicks I either found buried in a box of ex-rental screeners from the mid-90's or TiVo found for me at three in the morning when masturbation'd lost its touch.

These reviews will be short and may only focus on key moments, but they should pique an interest in flicks that had moments of fantastic camp, but kind of crumpled under the weight of trying to be too serious. 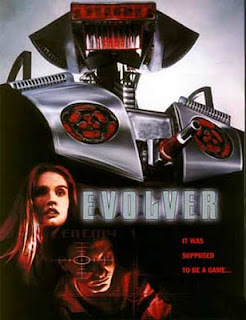 This movie is just plain ludicrous, and is the freshest on my mind, as the logical inconsistencies are a downright delight. Let me get this straight. In order to replicate the experience of playing a wicked rad early 90's 3-D video game, you win a robot that plays laser tag in order to replicate this feeling. Instead of feeling like a baller, a robot that cannot understand stars shoots Nerf at you and yells out imaginary hit points.

Oh, and it also goes berserk and murders everyone it comes across with. Then again, if I were a robot voiced by William H Macy playing second fiddle to Ethan Embry of all people, I'd feel a little homicidal too.

Evolver does evolve throughout the movie, becoming more menacing and learning such things as dramatic irony and being a dick. Also, being incredibly needy.

Evolver is like a co-dependent girlfriend that wants to play games all the time and then goes homicidal when he loses the game he totally wanted to play like three seconds ago and how dare you look at another girl when I am telling a boring story about Alcatraz because seriously who gives a fuck about Alcatraz anymore? 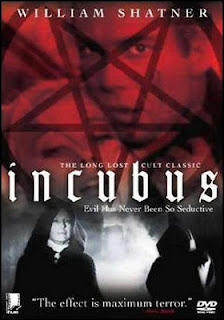 This is a movie where everyone speaks Esperanto and pretends it's a real language. And it stars William Shatner.

I will say nothing more other than the fact it has the most hilariously unconvincing blind acting I have ever seen in my entire life, and I've seen Daredevil. 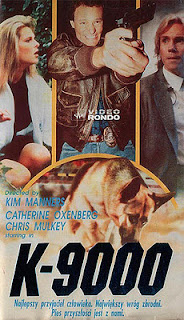 This movie takes far too long to get to the only part that counts: a talking straight man cyborg cop dog. But, man, when that dog starts talking it is amazing. The dog is nothing but a know-it-all jerk, and he makes Hank from Twin Peaks look like a blundering oaf at any given opportunity. Also he's a cell phone and does not understand the meaning of fetch.

(He so does not want to make fetch happen.)

However, I cannot stress enough how boring and uneventful the movie is until the cyborg dog hatches from a cocoon and steals the show, but man he's got some zingers that make this movie hilarious for about forty minutes.

And the ending is just divine. It involves a dog, on a beach, in sunglasses, sipping drinks from a straw and making dogs playing poker jokes. What's not to love? 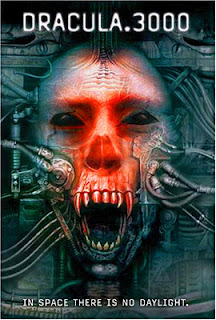 Okay, so this movie is Dracula in space and that has to be a selling point for a lot of people. I happen to be an ardent supporter of any franchise doing a space sequel, with Jason X being the pinnacle of the whole idea. In this movie, however, you have Casper Van Dien and Coolio fighting Dracula in the future.

What makes this movie hilarious is the fact that Dracula is straight up in a Toys R Us Lugosi-esque Dracula costume and running around with people in future clothes. They didn't even bother to try and update the Dracula image whatsoever, and that makes it brilliant. 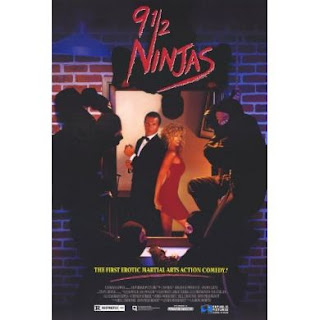 The jokes were there. The skinemax elements were there. The fights could probably be classified as martial arts. The bangin' and fightin' sure do fall under the category of action. There was even a ninja in a wonderbread costume!  But, christ this movie is a crazy hodge-podge of things.


Just. Just watch this trailer: Even in another language, you get the gist.

Yeah, I know I went full out list-mode on ya'll, but I wanted to show you that I did actually try to come up with something. But, it's October, so the camp will flow strong through me as the days go by.

Starting next week, I will be straight up in Halloween mode, scouring the crusted, black bottom of the cauldron for horror to really send shivers down your funny bone.
Posted by AJ at 7:59 PM