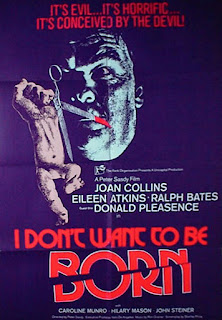 Sheesh this movie has gone by a lot of names. I Don't Want to Be Born should be the clear winner with that radical poster, but since it is streaming on Netflix right now as  The Devil Within Her, I guess that is the title I should use for this review.

I am an absolute sucker for any movie about killer babies. The inherent silliness of the concept tickles me pink, and the fact that there are so many of them is the funniest thing in the world to me. I don't know why anyone ever thinks it is a good idea, and I don't know how they end up managing to have the exact same plot only with different actors and pretend it is a coincidence. I just know that any time a baby is on a murder rampage, I am front and center, frothing at the mouth for the carnage to commence.

With that in mind, I still am going to have trouble to convince all of you to watch this movie. It is a 70's British  Horror movie will all the foibles that come along with it.  It is dreadfully slow and gets incredibly boring at times when the baby isn't murdering, and the accents are all over the dang place. Yet, somehow, and you really need to go with me here, that gives it all its charm. The movie has no idea what to do to pass the time between baby murders, and that is okay by me. There is a lot of comedy gold gleamed from it.

There is also the fact that this film takes a murdering baby with super strength incredibly seriously. There is not even an iota of acknowledgment that this idea is plain dumb, nor even a whiff of irony in the air. How dare you even suggest a baby that can wreck up his room and break dudes' noses with his fists be preposterous? Are you suggesting there is no such thing as a baby so evil it murders mice and puts them in coffee cups? He is, after all, possessed!

Oh, did I forget to mention this pint-sized slasher was also possessed by the devil? Because it is totally possessed by the devil. See, a normal baby probably couldn't drown his babysitter. A devil baby totally could though. Plus, any excuse to bring in the clergy in a 70's British Horror movie was always a boon. They loved them some Gothic crosses.

Now, I am not going to give you a summary of the plot. Like I said, a lot of it is tedious and boring, and spoiling the absolutely hilarious ways the baby kills people would be unkind of me. I have hinted (and straight up blurted out) some of the victims of the baby's rampage, but that is just the tip of the iceberg.

I will however, give you the premise of the movie. These are things that really happen and are really why the baby is a murderer.

So, our heroine, Joan Collins used to be a stripper. She wasn't particularly good at it, judging from the performance on screen, and misses the whole stripping point of being a stripper. To make up for her lack of knowledge and abundance of clothing, she has a partner in her dance. He is an ugly hunchbacked dwarf that totally wants to spelunk in her cavern, if you get my meaning. Anyway, after a rather lackluster performance, Joan Collins gets accosted by the dwarf. Since he totally didn't read the "you must be this tall to ride" sign outside of her lady bits, Joanie stone cold refuses his advances, and instead immediately bangs her boss. Joan Collins clearly knows where priority lies, and saunters out, disheveled only to have the dwarf curse her unborn child. A child that has not been conceived yet, mind you. Just at some point she will have a devil baby.

Now, I have heard of gypsy's curses and mummy's curses, but I did not know that a dwarf with severe scoliosis could also doom you. But apparently they can. They can also mix paganism and Christianity and have the devil be the one that possesses your child. Them dwarves be crafty.


I can actually stop right there. One: because I am having a hard time focusing on things right now as I got some problems to deal with, and two: because that premise all you need to know.


Well, that and there is a scene where the evil baby decapitates Donald Pleasance with a shovel.

Those are the two things that should make you want to see this movie.