Okay, so I lied about this entry being right after the old one. Do not ask me how I managed to fumble that ball, but after this entry, I promise the next and final entry should be up pretty dang soon afterwards. Mostly because right now, as I am writing this one, I am getting sleepy and also because it'll be about nine movies in total and that is enough content for people to not read. I do nothing else if not disappoint tremendously at every given opportunity. 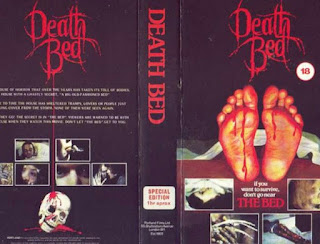 Death Bed: The Bed That Eats is a movie that get a lot of murmurs because of its title, and not enough because of how bizarre it is. A movie about an evil bed that eats people should be crazy enough in its own right, but damn does this movie not go above and beyond the call of duty.

I actually tracked this movie down well before Patton Oswalt did his little bit on it. I feel as though I should mention this, as it gives my blog street cred, and, as you know, in the world of internet blogging, if you ain't got street cred you gon' get capped.

I also mentioned it because Patton calls the movie Death Bed: The Bed That Eats People, but as you can see that is not the case. It is just a bed that eats, and boy does it ever eat. It is the goat of demonic beds. It eats people, fried chicken, apples, wine, pepto bismol, you name it. Actually, that is not so much goatlike and more gluttony. This bed needs to get payed a visit by Kevin Spacey, if you catch my drift.

Another thing that Patton gets wrong is that the bed is possessed by a demon. Not true. The bed is a demon. You know this because the narrator, a man trapped behind a painting which is actually the bed's gastrointestinal tract, tells you this. Well it's a GI tract/portal in between dimensions. I kinda wish I had that going on in my body. Just think of the time you'd save with that kind of anatomy.

In between eating everything, the movie tends to be your run-of-the-mill psychedelic 70's drug-fueled chicanery, with a lot of plot points that you aren't quite sure connect to form any sort of picture, but sure do take up time. Then the bed is on fire outside and you have no idea how anything happened to lead up to this, but you are okay with it.

However, let me tell you about the one scene that makes you need to see this movie:

Some dudes are locked in the room with the demon tempurpedic, and it is hungry again. Like it always is. Refer to my previous remarks on gluttony. Anyway, one dude has the misfortune to be dragged to the bed and have his hands sucked in. He pulls them out to find himself left with nothing but bone. He screams in agony for a bit, but then is totally fine. He walks around for a while completely okay even though he has skeleton hands. No pain. No nothing. They, naturally, crumble and fall off, but this does not phase him in the slightest. Throughout the whole ordeal, everyone around him is mortified by this fact, but he is perfectly cool with it. It is actually stunning to behold because you can tell that, even though this script is diabolically wacky, that totally was not called for. He is supposed to be inconvenienced by this, but the actor playing him was having none of it.

And that, my friends, is what it means to make choices when you are a thespian. 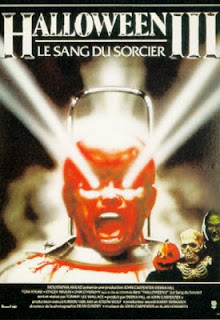 Yeah, I know what you're thinking.

How dare I talk about a well-known movie?

Oh, and also the part where all ya'll's completely wrong in disliking Season of the Witch.

I know plenty of other people have defended Halloween III, and I know I can't add something completely new to the mix and I know the fact I am reviewing it reeks of copping out, but I needed a palate cleanser in the middle of this marathon. Not that I can't watch these movies endlessly, I just needed a familiar face that I have seen about a billion times to kind of pick me up and get me going again.

So yeah: Halloween III: Season of the Witch.

It's about evil masks that murder children. 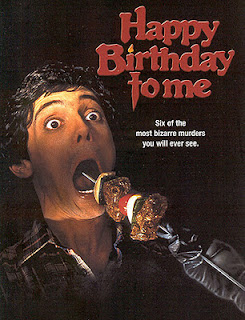 You know, just looking at that poster: a nigh two hour long slasher movie with only six deaths, on paper, sounds like a real chore to slog through. The fact that 85% of the movie is completely unneeded (a fact that many people I have made watch this agree on), does not really make a compelling case for this movie, either. The fact is, because this movie relies on its ridiculous characters and insipid plot, it becomes something you need to see.

Basically, the gist is, all the popular kids are getting killed, and also there's a girl with a tragic background who is also popular but whoops also the killer and whoops I guess that should be a surprise to like, the one person who has ever watched it and not seen the DVD box-art or just closed their eyes about half-way into the movie, where one of the many mysteries of this flick up and gets solved before the credits roll. I will give them credit for not having any loose ends. I will not give them credit for not taking the opportunity to make the killer be all mopey and whiny that no one is going to show up for her birthday. I wanted her to be that petulant.

Another thing that makes this movie so watchable is that it actually revels in all the stereotypes we are given. Again, there are only six victims, so we get to seem them stereotype it up to the hilt. The creepy red herring loner, alone, is fantastic. He spends his free time playing with a pet rat and making life-sized replicas of his friends' heads. Speaking of that, since when is the creepy loner in a horror movie allowed to be pals with the popular kids? Furthermore, since when do creepy loners get to have pals? Did I miss a memo? Am...am I allowed to have...pals?

But, I digress with that brief journey into my crushing loneliness.

The flashbacks in this movie are fantastic. They are maudlin and creepy and so bursting at the seams with inordinate amounts of melodrama, you might think you are watching a made-for-television special about class warfare and the dangers of alcoholism. The woman they got to play the killer's mother in those scenes wants so badly to be Faye Dunaway in Chinatown, but she is not very good. She does, however, make every single gesture a spectacle in and of itself, and you almost wish the movie was about the adventures of an alcoholic mother and her mangled daughter.

I also have to give props on the twist in this movie being the biggest pile of bullshit I ever did see, hilariously so. It actually makes perfect sense, and follows the plot of the movie pretty darn well. It is even believable to a certain. That's what makes it so hilarious. All these things in the movie could've ended up with us caring about the killer and sympathizing with her. But no, they did a completely different thing and though again, it is consistent with the logic of the flick, it just...it's part of the 85%. But the very last scene after the reveal is still fantastic.
Posted by AJ at 6:24 PM