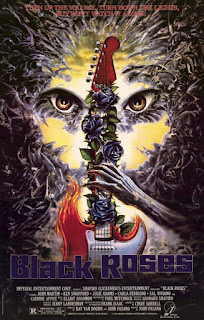 It's time for another heavy metal horror movie. I will not lie; I cannot get enough of them, and I will probably review every single one ever made before this blog dies with a whimper. I am okay with that though, because the soundtracks are killer and also no one reads this damn thing in the first place.

Black Roses  is another movie by John Fasano, a man who will also grace this blog again and again and again. For those who have forgotten, Mr. Fasano was the brains behind Rock 'N' Roll Nightmare, and as such his street cred in Camp Counseling is through the roof. He truly is a man who keeps on giving, and I want to shake his hand one day.

I just hope he doesn't crush me with his gigantic muscles for calling him completely and utterly inept. Seriously, Fasano is, or at least was, ripped. How else did he convince Lou Ferrigno's wife to be in this movie? I bet he arm-wrestled the Hulk into allowing his woman to be a completely superfluous character in a movie where the town from Big Top Pee Wee gets overwhelmed with homicidal teenagers.

But, yeah, Black Roses. I guess I should talk about the movie I am planning to review at some point in time, shouldn't I?

Black Roses is about three movies all happening at once, with each of them making less sense than the first in some sort of bizarre collage of preposterousness that tickles all the right fancies and funny bones. Also, there is nudity to touch all kinds of other bones. Yeah, that's right. I just dropped a boner joke. Never gonna apologize for appealing for the lowest common denominator. Coming soon: fart jokes made at the expense of Rosemary's Baby.

The flick opens with a rocking concert. This time I am not being facetious, as I usually am when describing these movies?


There it is. Is it not rocking?

Also don't get used to that demon makeup. It never shows up again in the span of the movie. Nor does anything remotely interesting for about thirty minutes.

Now, just because nothing interesting happens, it doesn't mean nothing hilarious happens. For some reason, they spend way too much time setting up the  town and characters as pretty much being idyllic and idiotic. It feels like a cheesy teenage slice-of-life picture from the 80's.

I cannot stress just how 80's this movie is. Not just in fashion sense and musical choices, but in the little flourishes. Thirtysomethings playing teenagers. Backwards towns that just won't get with the times, man. The fact that Canada will never not look like the 80's.

Anyway, nothing eventful really happens. We meet the characters, promptly forget why we are supposed to care about them, and all is well.

Then, Big Pussy gets eaten by a speaker monster.

I've always said I can pinpoint exactly when a film has gone completely off the rails, and most of the time I am bullshitting. But, my friends, in this movie, it is clear. The second that Vincent Pastore is attacked and eaten by a speaker, this film has derailed with insanity as its final destination.

The middle of the movie then plays almost entirely like a montage. I am going to try and piece them together for you, but it is denser than centuries old-fruitcake with nuttiness, and even though I literally just finished watching the movie, things are not coming back in the order they may or may not have happened.

So, Black Roses (which is the name of the band in the movie. Shoulda mentioned that sooner.) has totally corrupted the youth of the peaceful Candian town they are playing in, and shit gets real. Our hero, a teacher named Matt with a John Holmes mustache and no swagger to match is the first victim of this rebellion of thirtysomethings tired of playing teenagers all the time.

He finds the window to his car smashed and goes on an anger drive wherein he witnesses shenanigans. We see a montage of teenagers loitering and making out and beating each other up, and our hero is just plain sickened by it. He gets even more sickened when he goes back to school and finds that his students no longer want to learn about transcendentalism but instead want to rock out all the time.

One by one, we watch the teenagers do even more evil things. They start smoking and skipping class and, by golly, fighting in the school parking lot over records. Seriously, that scene ends with a dude being gorilla press slammed down because he tried to buy the last vinyl copy of the latest Black Roses album from the back of a truck. I am postulating they do not have stores in this town, as one is never, ever seen.

The mayhem only escalates from here:

- Big Pussy's son runs over trash cans and when his mother totally starts hassling him about coming home late, he runs her down, too. The fact he looks like a low rent Jerry Only kind of adds to the charm of this scene. He is probably picturing this woman as Glenn Danzig.

- One of the broads in the film plays strip gin with the father of her best friend in order to give him a heart attack in a scene that couldn't be creepier even if the girl playing his daughter played along too. This film has a love affair with creepy father/daughter relationships.

- The lead teenage dude totally smokes inside only to find the bass player from Black Roses appear nude in his bedroom and have sex with him. Naturally, this leads him to go into the kitchen and get the gun from the fridge to murder his father.

I am gonna pause a bit. I now know three things about Canada:

I feel as though I could seamlessly blend into the Canuck lifestyle with these three factoids.

After this first bloodbath, our teacher Matt is stuck in a conundrum as the teacher's pet, Julie, is totally skanked up and hitting on him, his students just plum don't wanna do their work, and well, he is really pretty bad at confrontation. He runs off to tell the mayor and we finally meet his girlfriend that had only been mentioned twice before. They have an inexplicable fight for no good reason that serves no purpose other than to show a cold bitch being told. And to hint that maybe Matt is a recovering alcoholic.

Then we see another montage which is pretty much exactly the same as the first only with more murder and the inexplicable "blood city" line I refuse to spoil for you. You just gotta see it to believe it.  While all this goes on, Matt makes the leap of faith that this clearly must be the work of witchcraft. You know this because he goes to the library and researches the occult. Teacher's pet shows up and tries to hop on his schlong, but Matt turns him down. So, Julie (well, actually, a breast double) touches herself in the mirror for a couple minutes and murders her step-dad.

This of course leads to not only the murder of Matt's girlfriend in her second scene in the whole movie, but the hilarious scene where Matt is seduced by a demon pretending to be Julie with a totally new body double. I don't even think they were the same ethnicity. Compound this with the absurdity of the fight and that at one point in time you can see the puppeteers, and this scene is a delight on so many levels.

Deciding enough is enough, Matt ditches his teacher clothes, dresses like a lumberjack and decides to take the law in his own hands. This leads to the ending. Which, like Rock 'N' Roll Nightmare, is just so absurd I cannot in good faith spoil it here. It's not nearly as out-of-left field as Rock 'N' Roll Nightmare, but it is definitely more insane than most of the endings I have posted here.

I would tear asunder all the technical and acting flaws of this film, but you can just copy and paste everything I said about Rock 'N' Roll Nightmare and put them here. It is as if John Fasano refuses to learn any lessons when making a movie, he just wants to put some rockin' tunes to people getting murdered. And for that, I commend him. Because I am okay with this.

Oh, and as an added bonus, here is the same song from the opening of the film set to scenes from First Blood.


It is all my loves colliding into a singularity. You should feel the same way.
Posted by AJ at 1:39 PM