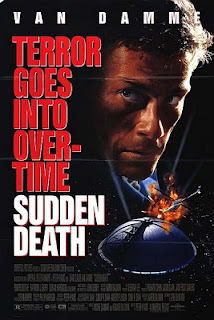 Then I watched Jean Claude Van Damme brutally pummel a lady in a giant Penguin mascot costume. I knew that fate (and insomnia) had intervened, and I just had to share this glory with you. Don't worry though, poorly made ninja erotica will be next week. But for today, let's watch The Muscles from Brussels roundhouse kick some guys in the face.

Before we begin, I can't really say I can comment too much on the technical side of things. This movie actually has some passable acting, even if the one-liners are lacking. JCVD was never one for pithy bon mots anyway. Plus this was during the era where Stallone and Schwarzenegger kinda backed off a little bit, so it was up to JCVD and Steven Seagal and Dolph Lundgren to keep 80's action alive amidst a sea of mid-90's wuss heroes.  Alive and straight-to-video.

The only real problem, if you can call it that, with this flick is that once the action starts rolling, it never stops, and it's going lightning quick. I can't remember exactly when each set piece took place. I can vaguely put them on a time line but goddamn so much happens so quickly it is like they are apologizing for the couple "bonding with children" scenes this flick has.

Also, the special effects weren't too bad. I was actually kind of shocked by how neat and clean everything was pulled off. What makes this movie special isn't any of the incompetence of the things behind the camera. No, it is just the sheer insanity of what is on the screen.

Let's begin, shall we?

Sudden Death opens with fireman JCVD trapped under burning rubble as a child burns to death. Apparently doing the splits did not prepare him greatly for tackling a burning building. The makers of this movie felt this was literally all we needed to see of his firefighting career. After this little bit of business, we immediately cut to two years later.

It made me wonder. Was JCVD even a good fireman? Had he successfully rescued people before? Where were all the other firefighters as he lay pinned under way too much rubble? Was he trying to play hero? And was playing hero that which got him burned?

Did I write the above paragraph just to end in a pun? Are these rhetorical questions annoying?

Anyway, being a bad firefighter lead to JCVD getting divorced and also becoming a security guard. As a security guard, he can now take his two kids to Game 7 of the Stanley Cup for free. You know, I think that is actually a pretty sweet deal. All you gotta do is deal with some drunken roustabouts every now and again and no children can be burned to death in front of you to make you question everything. Plus, free hockey. And as a Belgian action star pretending to be a Canadian security guard living in Pittsburgh, that is a big deal.

Oh and the Vice President of the United States is going to be at this game too. That is kind of a big deal, as well! I guess the president was too busy watching Friends or something to care about hockey.

While JCVD is busy being the best weekend dad ever, evil terrorists are slowly setting up the stupidest plan of all time. Apparently it begins with hassling an old woman. Seriously, these terrorists are dicks. All hasslin' her, makin' her feed them and call people left and right.

We will fast forward through a lot of set-up and get straight to what the plan is:

The evil terrorist has kidnapped the Vice President and all the people that were with him in a sky box. He shoots a couple to get his point across and have some corpse smell to really highlight the predicament they are in. He has planted bombs all over the arena. He wants billions of dollars, but knows that, in order to facilitate the plot, the VP can't give him all this cash money at once. So,  if he doesn't have a certain amount of money before the end of each period of play, he is going to murder everyone and blow up the stadium.

It's a pretty ridiculous plan, but I wonder if the title will come into play in his evil machinations? I can't imagine it will.

We kind of dawdle around a bit as the terrorist talks tough and JCVD talks with his kids and exciting hockey action happens(this movie is at least 40% just watching a hockey game).Then, finally the shit gets real. JCVD's daughter has to go potty, and her no-good brother wants nothing to do with escorting her to the facilities. He's kind of a dick and idolizes lowly hockey players instead of a true American hero like his father (who played a little hockey in Canada). The son smack talks dad a little bit, so the daughter walks off in a huff. A urine-infused huff.  Little girl wanders into the ladies room and sees that the lady who played the mascot penguin has been murdered and replaced with a terrorist.

The daughter tries to get away clean after being traumatized for life but gets abducted after the terrorist kills a bunch of people and runs out of bullets to shoot her. Terrorists do not believe in extra ammunition, it would seem. I guess they have learned that in the right hands, a gun only runs out of bullets when everyone you want killed is dead. In an action movie, at least. Clearly this gun was in the wrong hands. No terrorist is All-State Insurance.

JCVD returns to his son after doing, well, I have no idea what he was doing, but it had to be more important than spending time with his kids. He questions his son, who totally just dismisses it because hockey is going on. JCVD then goes on a frantic search to find her.

You'll notice that, right now, the only kill under JCVD's belt is one due to negligence. How can this be an amazing action movie without some kills right? Well, see, Sudden Death wants to lull you in a sense of false confidence. You are certain that this may just be a bloodless coup. Maybe JCVD will sneak his way up to the penthouse box, rescue everyone, and take out the bad guys without using lethal force. Maybe JCVD is going to tap into his inner Batman.

Nope. Wrong. Not even remotely close to what happens in this movie.

See, JCVD does a little searching for his missing daughter. He runs into the kitchen area of the stadium, and, well, this happens:


Yes. That is correct. The first actiony thing JCVD does is murder a woman dressed in a mascot costume. And that, my friends, is right when this movie veers off the standard path straight into the absurdity gorge. It also foreshadows that this is no ordinary kitchen, it is a murder kitchen. You will find out why later.

Meanwhile, in the penthouse box, the evil terrorist is taunting a secret service guy named Hallmark. Hallmark is the Allen to JCVD's John McClane. Eventually they even have the radio back and forth relationship until Hallmark says enough is enough and decides to help out, immediately getting killed for trying to steal the Time Cop's thunder. That happens later.

Right now, however, the terrorist sees that helicopters are trying to land cops on the roof of the stadium. He is not happy with this, so he has one of his minions shoot the people out of the sky with a rocket launcher. Not the copter mind you. That would be too easy. Nah, he's just going to blow up cops to prove his point.  I find this to be a much more evil way to say "don't fuck with me."

Then we kinda get a pseudo-montage of JCVD defusing bombs, but not before he stabs a terrorist in the throat with a chicken bone. I have no idea why he back-tracked to the kitchen. I guess it was because he did not use all of the weapons at his disposal the first time.

Come to think of it, I don't quite remember how he figured out there were bombs everywhere, but the fact the lead terrorist blew up cars in the parking lot for no reason may have tipped him off.  This dude does not do anything half-assed. He will blow up everything. Including random buildings across the street for no discernible reason. There is, no lie, a scene where the dude with a rocket launcher on the roof just starts blasting away at buildings.

Things get tenser, and the lead terrorist kills some more hostages. Hallmark comes in and gets killed. JCVD gets a hold of one of the dead terrorist's walkie talkies and talks to his little girl and then the lead terrorist and grills him out for a bit. This leads to the boss terrorist to send underlings after JCVD.

Naturally this leads to JCVD , in the middle of game 7 of the Stanley Cup, to go undercover as the Pittsburgh Penguins' goalie.  The movie then, for a brief period of time, plays just like a Mighty Ducks flick. Can JCVD roundhouse kick his way out of a breakaway?

The answer is yes. He stops one shot and then starts beating up the rival team for, well, no real reason. I guess to cause a ruckus? Or get himself ejected? If so, why the hell did he choose this disguise anyway?

After this we get the climactic finale. I will not spoil anything but these are some things that happen:

I may or may not have listed that twice to convince some of my Pittsburghian friends to watch the movie.

Perhaps with a case or two of Iron City?

What I'm saying, readers, is bring me beer.