Okay so, I am going to watch movies in batches and post responses to them here. This one was pre-written, so it will be followed by another entry immediately after. The reason for this being I woke up late and forgot to post this before running some errands. Some beer related errands.

I figure 3 movies per post, and I should be solid. Oh, and I am kind of cheating here. I can't possibly watch and review a respectable amount of movies for this, as that is about 3-4 hours per flick, and that is time I just ain't got because goddamn I wanna sleep. Therefore, this first entry will be movies I watched this weekend. Some were at the absolutely stellar Exhumed films 24 Hour Horrorthon, and others were last night when my circadian rhythm was gonzo and I was up all night.

But enough blabbing, let's get to them movies shall we? 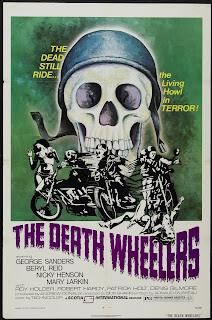 This movie probably had a plot at some point. I am convinced it must have. This is not a case of a film where you can see glimmers of a plot through the wackiness. No light gleams through the words being spoken, nor the actions being done on screen. It is a smörgåsbord of scenes that somehow defy any and all attempts to possibly make sense.

Needless to say, I love it.

The whole movie is wonderfully 70's British, to the point where even a widowed fortune teller can have a butler and a mansion and the tough guy biker gang names are Abby and Chopped Meat and their jackets look like something a teenage girl with a bedazzler and a hot glue gun would make to show that she and her friends were best friends forever.

But what really makes it magical is their hard sell on frogs being some mystical, mysterious, mystical thing. It is all a bit miffing, to be honest, as the mundane frog does not commit to his role. Seriously, frogs just naturally look confused, so it doesn't work. And trying to pass off a giant frog on a necklace as some ancient symbol of protection against I don't even know what as that would require the movie to explain, which it has no plans on ever doing.

Everything about this movie is hilarious, from the terrible dialogue, sandwich eating reaction shots, and super low-speed motorcycling, it is just aces in that it fails to do anything even remotely well. Well, except for, and I swear this is on purpose, change the protagonist every twenty minutes or so. You have no idea who to root for, and you really don't care because zombie bikers are murdering folks.

Oh, and before I forget. The entire premise of the movie is that you can come back from the dead if you really believe you can. No magic. You just gotta believe and really want to die. And, just like the frog, they try to hard sell this too, to hilarious results. 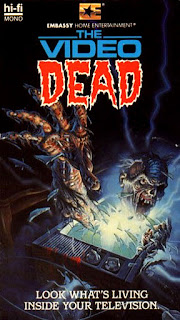 So, in this movie, the video dead are terrified of their own reflection in the mirror and truly think they are alive for some reason. So, if you shoot them in the heart or whatnot, they will totally think they are dying and will lay down for a bit until one of them is smart enough to figure out that, nope, not dying. Nothing exemplifies this more than the scene where a zombie gets an iron through the skull and just walks it off.

These hindrances aside, the zombies are actually smarter than the cast. They can use weapons and knock down mirrors with tree branches and orchestrate carefully calculated assault. They just can't open locked doors. Or knock them down. This is not explained in one of the thirteen billion exposition speeches, but I figure that makes more sense than jingle bells ringing like mad when zombies are near. And yes, that is an actual plot point.

Their other weakness, however, is Daredevil: The Man Without Fear, because apparently, if you aren't afraid of them they won't hurt you. All you need to do is cook them a nice meal and play some Scrabble or Connect Four with them, and they are harmless pussy cats.

There's about a billion other things I could bring up, but I am going to let The Video Dead rest for now. 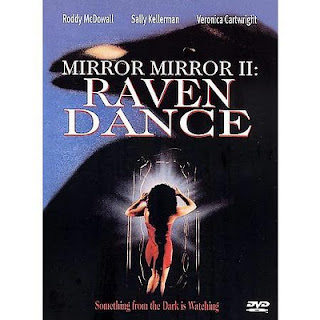 Rounding out this entry is a movie that will probably be my claim to fame. If you do enough digging on the internet, you may see that I have talked about this movie numerous times before. I am convinced I am the only person alive who has talked more about this movie than anyone involved with its creation.

Yet, every time I watch it, I find some new absurdity. I peel back another layer of the inept insanity, and fall in love all over again. This movie really has it all. Abysmal child acting, ladies orgasming over an evil mirror, the teacher Rodney Dangerfield banged in Back to School being in cahoots with Peter Vincent to ruin an orphan's life, blind nuns, and early 90's CGI. Poor early 90's CGI.

Oh and an early appearance by The Hulk himself, Mark Ruffalo. In fact, the cast is actually insanely good for such a ludicrous and unnecessary film. Well, except for that damn kid.

What makes Raven Dance so hilarious works in two states of mind. The first is having no idea what will happen in the movie. The totally ridiculous chain of events needs to go unspoiled. The bare bones list of things you will see in this movie I gave you is all you should know if you are a virgin to Mirror, Mirror II. Believe me, it never stops topping itself.

The second way is if you have seen it before. The anticipation for the craziness is just as much fun as seeing it unfold for the first time. Bonus points if you are watching it with someone who hasn't seen the flick before. Plus, when you know about the surface absurdities, you can really pay attention to the little things. Like the fact there isn't a raven in the movie until about forty minutes in and it doesn't, in fact, dance. Or you can spend your time trying to figure out what the hell that cat's name is. Best guess I have is "pilerocket," but that is not a name at all.

Seriously, readers. Watch this movie multiple times. Make everyone you know see it. Mirror, Mirror II: Raven Dance needs to become a huge underground hit only 17 years after its release. I want Mark Ruffalo to confront his association with this franchise.
Posted by AJ at 5:04 PM