No introduction this time, suckers. 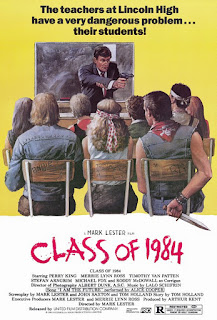 You might think that Class of 1984 is not a horror movie. You'd be wrong, though, because nothing is more terrifying than teenagers with attitude. Only now, in my late twenties, do I realize that the real hero of Mighty Morphin' Power Rangers was indeed Rita Repulsa. Teenagers are vile things that need to be destroyed, and these teenage murder rapists, though not foiling any missions of mercy or hanging out in juice bars, are instead getting busy harassing poor Cornelius.

Man, Roddy McDowall is making the rounds in this marathon, and I promise it was not planned that way. You should know by now, any marathon will have some appearances by either Roddy or Malcolm. Even though they are not brothers and spell their names completely differently, they both had something in common: taking any role offered to them. This ends up with them being cornucopias of charming treasure for Camp Counseling.

This movie also features a chubby young Michael J. Fox as a big ol snitch who indeed finds himself needing to be stitched. But, really, the star of the show is the head punk. He is a stone cold sociopath with a penchant for writing sonatas and raping his teacher's wives. Oh and murdering animals and hanging them up on walls. Oh, and beating himself up and blaming the teachers. Oh and out-Zabkaing Zabka. Really, Stegman is what would really happen if they let those quasi-homicidal 80's teen movie bullies cut loose. It's refreshing and disturbing in that way.

Even though Stegman is pure evil and consistently brings the craziness, there is one scene that stands above all. I am too burned out to write about it so, watch it: 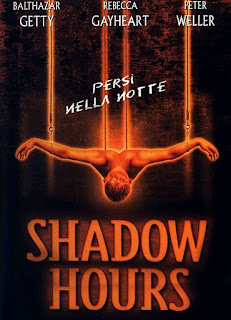 This is a movie where Robocop corrupts Balthazar Getty (who looks like chubby Charlie Sheen) and I am pretty sure he is supposed to be the Devil and his pregnant wife is supposed to be an angel and aww, who cares, it has a scene where Peter Weller gets really into hanging out in sex dungeons and spouting off bullshit philosophy only to try and make Chubby Sheen bet on some Russian roulette.

The movie is about Balthazar Getty being a recovering alcoholic and totally being cool with a rich writer buying him clothes and booze and whores and drugs and making him follow him everywhere at odd hours of the night. I have no idea how this could possibly backfire, nor could this be construed as something totally not on the up and up. His wife is not so cool with it, because maybe she has some common sense, but who cares about that? He is getting fat stacks of to watch a live action Faces of Death. Plus, she is obscenely pregnant, so hormones along with being a female makes her judgment more than questionable.

What I love about this movie is that it is all about Peter Weller talking a whole lot and getting darker and darker and darker and darker almost to the point where you can't take it anymore and then, instead of a bitter climax that really shows any sort of catharsis, Chubby Sheen just says "fuck this noise" and crawls away. Sure, he can deal with opium whores and underground fight clubs, but people risking death for money is far too much. That is his breaking point.

There is also a ridiculous sideplot about a murder investigation that really does nothing but add up to the fact that, now here's the shocker, Peter Weller is also a mur-diddly-urderer, and it is so there for padding because we can understand, very easily that he is the villain. He doesn't need to be the guy murdering left and right to give that cop purpose.

Oh hey, did I mention that is kind of his metaphorical shtick? Peter Weller is there to make people go through horrible, terrible, no good things so they can emerge better people. So I guess he is not the devil. Maybe he is the angel and Chubby Sheen's wife is the devil,  because she doesn't want her husband to get saved. If so, Chubby done fucked up by staying with her in the end.

Also, wouldn't Chubby Sheen getting clean and sober and being in AA and having a steady job after being an abusive alcoholic in the past be enough? Why does he have to suffer again, for no good reason, to be a better person? Did he not learn enough of a lesson?

Why am I thinking about this movie? It is hilarious, either way, especially because this is a movie for the Donnie Darko sect. They will think it is incredibly deep, when really it is incredibly stupid, so you can spend your time laughing at it for trying to be so serious. 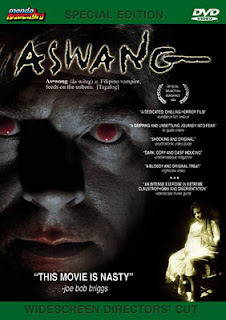 Indeed this movie is nasty, Joe Bob Briggs. Indeed it is.

Aswang is about an evil vampire that eats fetuses and the creepy family that feeds women to it. The titular aswang is played by an old woman, and she is hella naked in the movie and you can see some wrinkly bits. Also it is dang near impossible to find anything about it on youtube other than a poor quality trailer.

You know what, I got nothing left in the tank.

Here is the trailer