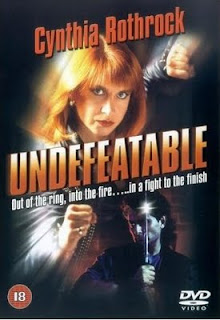 There are numerous reasons I am reviewing this movie, but first and foremost is because of a certain video on the internet that spoils the final fight of this movie. Now, I am not saying that said fight is not one of the most absurd and hilarious things ever filmed, but it doesn't really capture the essence of what Undefeatable is. It is only one, tiny component of the sheer lunacy that boiled over and spilled out this flick. And, god help me I hate saying this, that one clip doesn't have enough backstory (a dreaded word in Camp Counseling), to have you laugh as completely as you should.

Undefeatable, much like Rock 'N' Roll Nightmare, is also one of the reasons I started this blog. I can't count the number of times I have seen at least part of this movie, nor has it ever been anything but an unadulterated delight every time I have. Even though I can recite every stilted, head-scratching one-liner, I still grin like my veins are pumped full of nitrous oxide every time one of the characters flatly delivers it. It is a joyous work of complete and utter ineptitude that it's a siren's call to me every time I find it playing on television or see it peeking at me on my DVD rack. I may not watch it every single time, but I know it will always be there to thoroughly entertain me.

Also it helps that Cynthia Rothrock is the cutest of the 80's Action ladies. While the competition was anything but fierce, having the queen of 80's Action be a looker in the same way that, say, Molly Ringwald was a looker, is an advantage. I am also not ashamed  to admit that, even to this day, I have kind of a crush on Mrs. Rothrock.  It is impossible not to get a crush on her during this movie because she will use any excuse to do a split and show off her cleavage. Not even Gymkata has more people doing splits than Cynthia Rothrock does in Undefeatable.  I take this as a boon because while Kurt Thomas is a real life Gumbercules, he's very much a butterface.

What am I even doing in this entry? This is a lot of set-up for a review about a movie where the main character doesn't even fight in the climactic finale that involves a dude flexing his shirt off.

As for the plot of the movie, I refuse to spoil it for you. I could make a myriad of jokes about every single scene, but I am not going to do it. Not only would this entry would be about seventeen pages long, but I wouldn't even begin to scratch the surface of this gem.  I'll still summarize it in a paragraph or two, but I can't do a scene by scene deconstruction, as there is way too much to deconstruct. Not a single scene goes by where something completely ridiculous doesn't happen. Not a single frame is wasted on competence and compelling story-telling. Not a single millisecond isn't the funniest thing you have ever seen. In terms of the criteria I use to judge a movie as good, this movie is downright perfect.  Alas, though, I must soldier on.

Undefeatable is the story of...well, I have no fucking clue who the main character is supposed to be, but I guess Cynthia Rothrock because her name is the biggest in the credits. Anyway, Cynthia Rothrock is a waitress named Kristi who kung fu fights hooligans for fat stacks of cash on the side to help put her sister through medical school. Also starring in this movie is a detective named Nick DeMarco. He totally knows all the martial arts and beats up people who rob what appears to be a pizza shop. Meanwhile, there's this guy named Stingray who is jacked in the head and gets off on beating the living tar out of anything that moves. Kristi gets arrested after totally pulverizing one of many stereotypical black guys (don't worry, the Asians are even more stereotypical and also barely speak good English) into the ground and meets who will soon be her cop buddy, Nick DeMarco. Also, his stereotypically way too New York Italian partner is there. Anyway, Stingray's wife leaves him after seeing a shrink and he goes on a murder rampage because his mom ditched him to bang other dudes when he was a teenager. Somehow, as if by magic, all these stupid plots converge when Stingray kills Kristi's sister (like 45 minutes into the movie), and Kristi turns into the worst Batman. Oh, and Nick wants to bring Stingray down because the mayor has his stupid chief's balls in a vice.

Anytime I can work a pun into these entries, my ego is satiated. But, this is not the time for ego wanking. Let's get down to the brass tacks of what makes this movie so guldarn special, shall we?

The acting has to take front and center when you are talking about how hilarious this movie really is. Every single cast member has the complete and utter inability to emote. All the acting is flat. And when I say flat, I mean that not a single ounce of effort is put into anything said. It is beyond teleprompter reading. There is not a single iota of conviction behind any sound that comes out of any of the actor's mouth holes.The acting is so flat it makes TV's Frank look like Richard Burton. The acting is so flat that if you looked at it sideways, it would disappear. The acting is  flatter than Kitty pre-boob job -- surfboard acting at its finest. It is almost an odd delight as the actors try to move their hands around and put some sort of emphasis behind everything they say, but the just cannot emote. They are like robots, almost, but even Robbie the Robot had more range than this chuckleheads.

The plot, which, again, I won't really spoil, is another factor that makes this movie spectacular. It just does not care about making sense of having any sense of propriety or timing. Things just roll along and then maybe something bad will happen to change the course but it doesn't really effect things. It has this strange way of both plodding along and jumping violently ahead at the same time. The fact that the three characters' stories only tangentially interact with each other for the longest time does not make things better, but somehow makes things funner. It is just a bizarre sense of both not giving a fuck and really wanting to tell a story. Only not having the talent to do either.

When it comes to pacing/editing, I will  have to spoil one thing. There is a part, early in the movie, where Nick is investigating Stingray's first murder victim. From off-screen, presumably filmed somewhere else, a uniformed cop tells him that he has a call. Nick walks towards him and straight into the next scene. . He takes like three steps and bam, new scene in a new location with a whole new dead body.

There are a myriad of other little things I could harp on. I honestly am restraining myself because this, more than any movie I have ever reviewed, needs to be witnessed with as clean of a slate as possible. In fact, this doesn't even feel like a review, but more a plea to get you to watch this movie. You, readers, need to witness this. You need to see Cynthia Rothrock act her little heart out without raising her voice. You need to bear witness to the glory that is Bear. You need to bask in the glow of Stingray's childhood trauma. You need to see all of these things without knowing what you are in for other than fun.

I guess why I am so big on this movie is because of that clip, and because of things like Superdickery and all its ilk. I am tired of people seeing only a single clip or a comic book cover and assuming that is the zenith of zaniness. It isn't. Crack open that comic, flip on that flick, bury yourself in that book. I promise you that while you have only seen the tip, that crazy iceberg has so much more to offer you in its underwater core.

Undefeatable, more than any movie I have reviewed, proves exactly this.