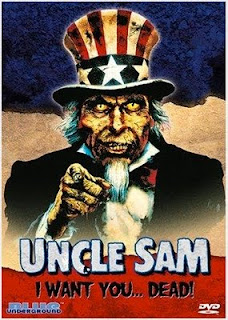 Today is the tenth anniversary of 9/11 and I am going to do something special here at Camp Counseling. This blog is supposed to be light and fun, and I am not going to comment on the atrocities that happened seemingly yesterday. The last thing anyone needs is a bummer.

Instead, I am going to talk about a movie that features a fighter pilot rising from the grave to kill people who hate America. Maybe it's a little bit of wish fulfillment, but I don't care. I love this movie.

Uncle Sam entered my life when I was a kid or young teenager. Somewhere in the late 90's. I grew up a few blocks from a video store that went through countess different name changes. My personal favorite was Moovies, but that's because a cow shilling straight-to-video slasher flicks from the 90's is a mental image I can never not love. I would go there damn near daily during the summer because the crap movies could be rented for 69 cents a pop. That is how I saw every single Godzilla movie up to that time in the span of a week and discovered my love of Charles Bronson.

Now, I am not going to lie, when it comes to campy movies, sometimes you can judge a book by its cover, and man the art for Uncle Sam just told me I had to see it. The only time I ever got burned by this method was with a movie titled Plankton, which I thought would be perfect but it did not, in fact, feature killer plankton. Boy was I cross with that.

The point I am trying to make, in my round-about way, that this movie is special to me. It may not be the best example of what makes Camp Counseling what it is, but I know you all will dig on it. And to prove this, I am not reviewing this movie. Instead, I will have a group of people watch it with me and I will post their reactions/mini-reviews. I always say that this blog is not so much about telling you if a movie is good or bad, but more telling you why you need to see a movie. I am putting my money where my mouth is here with this.

"I used to think I knew what it meant to be an American. But a boy named Jody Baker changed that, today. No longer am I an American. I am a fucking terrorist who deserves to die at the hands of our greatest American icon, Uncle Sam. Well, not the Uncle Sam, really, just a Sam who happens to be an uncle. Not much else makes me want to devote my life to this great country than the constant threat of some child’s undead uncle killing me for dropping an American flag on the ground. Or for not recycling. Drinking imported beer...

Uncle Sam was not entertainment. It was a life changing experience. God Bless America."

"The 1996 super-natural thriller Uncle Sam certainly is a film that burns a fire deep under the heart of any true American. As opposed to films like We Were Soldiers or Saving Private Ryan, Uncle Sam is the only super-natural film that can make you sympathize with a rapist-turned-zombie as he hunts down flag burners, hippies and corrupt politicians. But while this burn-victim bully paves a path of terror the real monster in this film, and really the main source of joy, is the ten-year old nephew Jodie. Jodie has some issues, one of them being him probably being a dyed in the wool sociopath. Ever served in the army? Nope? YOU’RE DEAD!!! And truly the real spirit of the film isn’t found in Uncle Sam’s slayings but in Jodie being an absolute dick to everyone. This is served on a double dish of absolutely amazing dresses, Isaac Hayes firing anything he can get his hands on and a mystical, blind fireworks victim who is going to truly make you “Deal with it.” In the end Uncle Sam is a film that launches a cannon ball full of nationalistic-fueled passion into any red, white and blue soul."

It's not a movie I'd watch on my own, that's for sure. But having a group of people to point things out and laugh at is the most essential component of any bad not boring movie watching, and that's exactly what we had. There were lots of little things that made it great, like the mom rubbing some cream on Jodie's foot as it bled like crazy, then telling him to fuck off and go to sleep, or the way the blind kid was always so blunt and confident about everything he said when he had no way to even tell what the hell was going on, and so on. But I've gotta say, my favorite part was when I called out Uncle Sam as a zombie, and then BOOM HE WAS A GODDAMN ZOMBIE.

Also the dicktalk throughout, because boy howdy do I looooove me some dicks mm mmm."

"Holy shit. Just Holy Shit. Let me preface this by saying: Holy shit this movie a special kind of crazy.

This movie starts off on a strong foot, maybe the best scene even, where a guy with the voice of a man who smokes 80 packs a day and kinda looks like Charles Bronson if he were 90. The movie stars what has got to be the most psychotic kid I've ever seen, he's the next Audy Murphy the way I'm looking at it, what with his obsession for going into the military and kicking non-American ass. His uncle sam dies in Kuwait, which was shown in the scene with Smokey McBronson, and the kid (whose name is Jody haha, sucks for that kid) thought he was the best thing since Apple Pie and American flags.

But skipping all the boring reasons why his uncle COMES BACK FROM THE DEAD TO KILL PEOPLE WHO JODY PERCEIVES AS NOT UPHOLDING AMERICAN MILITARY VALUES.

Kid's a psycho, and god bless him for this hour and a half of crazy.

The kills are pretty darn good in this movie so I'll refrain from spoiling any of them for any who've not been blessed by William Lustig's magnum opus, watch it on netflix streaming asap.

Uhh, did I forget anything? There's some other characters too, I guess, like a blind kid who can see the future(?) and a black guy with a great voice and acts like he has a prosthetic leg, also some pretty great dresses (this is sarcasm).

This movie was quite amazing. Not the movie itself of course. Oh no. It blew. But the discussion was fun! Those dresses were fantastic, and by fantastic I mean 'hideous.' I think my favorite parts of the movie were when everyone was reacting to an Uncle Sam kill. "Why did he do that?" we would ask. "That wasn't fair! That wasn't just!" We were expecting the zombie Uncle Sam who was also a rapist to be rational and just in his murders. That is a silly thing to expect! But I expected it as well! I am apparently quite irrational! And that fucking KID. Choadie. He was a psychopath, and that was enjoyable. All playing with his G.I. Joes after declaring he was in mourning. And the blind kid who somehow could tactically assess a combat situation! What was that, I ask you. WHAT WAS THAT?"

Okay, so not everyone took this seriously, and that is exactly what I wanted. I had a few other people watch this and not give me their thoughts. Bully on them, but I can't change that. Some people don't like homework after watching a masterpiece like this.

I hope others' enthusiasm will make you want to track down this or any of the other movies I review. I sincerely love everything about this blog and every movie I watch. I don't call myself a reviewer or a critic or anything remotely similar. I appreciate these movies. Movies that were made to entertain and nothing else. There is a place for them in this world, and I honestly feel that if every flick released had to have a serious message or try to jerk those tears right up out of you, the world would be much worse. Sometimes you need a simple, ineptly told story about insane jingoism to pass the time.

Next week I promise not to be all emotional. But for now, for today, why not let a little heart shine through?
Posted by AJ at 8:55 PM