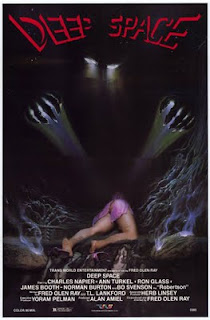 Gonna preface this entry with the fact I love the fact I don't have to begin this post with "my computer." Every post I made in the past two weeks made me feel like I was the guy who talked about his girlfriend way too much. You know that guy. You hate that guy. Well, at least, I hate that guy. He's kind of a dick.

Okay, that is out of the way, now lets' talk about a movie where Duke Phillips fights a space monster. God it feels good to be back.

Being as it is a Frankenstein's monster of a picture, I can't really sum up the plot. I am constantly mixing up when things happen, if they happened, and when I try to remember bits of if I am not sure what I saw didn't happen in another movie. This flick hits every cliche of every genre it is a part of, and at times, it is hilariously overwhelming. How are you going to have a "turn in your badge and gun" scene immediately followed by "stupid teens with a broke down car" scene and expect me to keep track? Fred Olen Ray, you are a devious, devious man.

Did I mention the illustrious Mr. Olen Ray directed this gem? If you are as into campy flicks as I am, you probably know his name by now. He not only makes schlocky horror, but also dabbles quite heavily in the Skinemax realm. I mention this because you've probably seen his work at 3 in the morning that one time you were really, really lonely.

It's okay. I'm not judging. Plus, there were some fine performances in Tarzeena: Jiggle in the Jungle.

For those not in the know, man, you are in for a treat when you pop in his fine wares. He has this prolific incompetence. It is staggering how little talent this man has, yet, he keeps trying. He keeps on plugging away and nothing ever works, but it never discourages him. Also, he is swimming in all that sweet soft-core cash, so that's gotta perk up his day.

Never before have I seen such a wide variety of talent-levels and skills in one flick. Charles Napier is pretty much Duke Phillips all the time, no matter what he is in, and is a treat as a grizzled old detective fighting space monsters. I call him the base-line because he is adequate enough in the things he needs to do.

His partner, however, is hilarious. He seems to come from the blaxploitation school of ridiculous over-emoting to try and rise above the sewage being filmed. The problem with this being, he is the only dude doing this. He wastes way too much effort to deliver even the most useless of lines and it is a goddamn delight. Picture the scene of Jimmy in the opening of Black Dynamite and you have this guy pegged.

Then, you have the lady who plays his love interest, who has the charisma of a wet paper bag, and the two have almost zero chemistry. Charles Bronson had more chemistry with his leading ladies than Napier did with this broad. It is almost painful seeing them try to interact with each other.

The bit characters are even more erratic from the stupid chief who looks and acts like he is one second away from snapping and massacring the cast and crew, the evil scientist who cannot stop hamming it up for even a second, and the crazy exterminator who is a character straight out of Beakman's World.

Finally, you have the army dudes who are straight up teleprompter reading. I refuse to believe that they were not. There is no other explanation for their line delivery.

Oh, and Julie Newmar is in the movie too. She has like three scenes, and they all involve her looking and sounding pumped full of morphine and prattling on about how she is psychic and knows things. Basically, she is there when Fred Olen Ray can't figure out a proper way to bridge two scenes together.

Now, let's talk about the monsters. They are the love child of the Xenomorph from Alien and the Pizza Monsters from Teenage Mutant Ninja Turtles.

You know, these guys:

Only with a lot more spikes and about a billion times less convincing. Oh and it has a stomach mouth vagina that shoots tentacles to eviscerate its foes. I actually really dug the monster because it is such an awkward costume that the bits of rubber would flap in ways I am relatively sure were not scripted or wanted.

The other kick I get out of this movie is how blatantly it steals from other movies. Remember that scene with Harry Dean Stanton and the cat in Alien? It's totally in this movie, only with an old security guard and with the monster being a jerk. Also, Charles Napier straight up cop's Ash's look in The Evil Dead for the big showdown, up to and including the chainsaw. Not as a hand, that was Evil Dead 2, but he still rocks it and gets covered in an accurate represenation of the blood and grime Ash has by the end of the movie.

There are other swipes, but I'll be damned if I remember them. Though, as I talk more, bits of pieces of the plot come to me. That is how this movie works. It creeps in and out of your brain.

There is, actually, one more scene I have to mention before ending this. After only being in one other scene with him, our love interest totally digs on Charles Napier. So, she goes to his house, and after Julie Newmar calls and harasses him, ol' Charlie burns his delicious steak dinner, and instead opts for the much classier fast food/champagne menu. Lady cop is trying her hardest to convince us she is an actor, but it isn't working, so Charlie asks her if she wants some after dinner music.

He disappears and we see a straight up Batman style gearing up montage as he puts on traditional Scottish garb and comes out playing the bagpipes. It is downright surreal as it is a serious, no-nonsense, tough-as-nails beefy montage. It is the type of montage you know should lead to fools getting wrecked, schooled, wasted, plugged...well, before fools' days go down the shitter at a rapid velocity.


Anyway, Charles Napier comes out mincing about with his bagpipes. He is going to seduce this lady by playing the bagpipes. The loose cannon cop who plays by his own rules and does not have a sensitive side plays the bagpipes to make women strip naked.

It is like Mr. Olen Ray saw Stone Cold and scowled menacingly at The Boz's pet komodo dragon, deep down saying to himself  "I can top that."


And really, Freddie O. Ray, you totally did. You totally topped Stone Cold.  I hope you are proud.

Flip back here tomorrow for the beginning of my harrowing and hilarious journey through the world of BET's Black Panther.
Posted by AJ at 1:20 PM