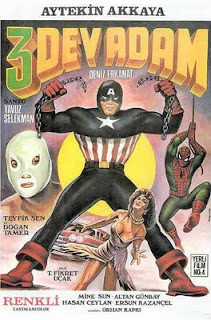 3 Dev Adam, in short, is a movie about Captain America and Mexican wrestling icon El Santo battling an evil, murderous Spider-Man and his army of Paul Kersey look-alikes and karate guys.

3 Dev Adam, in summary, is probably the culmination of all my previous entries. It dips into a little bit of everything I loved from Rock 'N' Roll Nightmare to Black Panther.  It is a surreal fever dream of everything that you could possibly do wrong, yet oh so right. Plus, it is blatant copyright infringement and Spider-Man not only is evil, but he has these wicked long eyebrows and wears blue eye shadow. And he stabs people with a switchblade.

Now, on to the review.

I honestly do not know how to describe the thing I just saw, and I have seen it countless times before. 3 Dev Adam is a movie I will downright force people to watch, and I always get the same reaction. It is absolutely insane, and yet it immediately leaves you once you have seen it. Your brain cannot accept what you just saw, so it immediately throws out every memory of it. Thus, every time you watch the movie, it is like it is the first time all over again. And that is it's secret strength. That goofy grin you wear the first time is the same goofy grin you will wear the 100th time watching this dang movie.

Another thing to keep in mind when watching this movie is that the entire film is comprised of the middles of scenes. There is no beginning nor no end to anything that happens. Every cut is like thirty seconds into whatever was happening and ends about a minute before the natural end. It adds to the bizarre viewing experience. I would say that it is like watching a movie made entirely of jump cuts, but there are actual, poorly placed jump cuts in the middle of every action scene. It really is a sight to behold.

The flick opens with evil Spider-Man and the Paul Kersey players burying a woman in sand as she screams horribly. They all laugh maniacally and push a boat propeller right into her face.  It is at this point I am convinced that this movie was really written and  directed by J. Jonah Jameson, but only the Turks had the balls to finance his operation.

This leads to our credits sequence which is just stills of all the major action scenes in the movie with words over it. Honestly, you could watch the credits and know everything that happens.

Immediately after killing that lady, Spider-Man finds him being chased by the mafia. The mafia hates Spider-Man because he is a better gangster than they are. So, Spidey hides himself behind conveniently placed lumber and jumps out, stabbing them both and uttering the greatest line in his entire history:

This is complete with a Spanish accent and everything.

Keep in mind this is a film made entirely in Turkish, and Spider-Man is supposed to be Asian. Well, not in real life, but in this movie. He is an Asian gangster who stabs people and prints counterfeit money. JJJ must've been stuck in Japanazi hatin' mode.

I can't talk about the plot anymore, because once I get to the point where El Santo beats up four karate guys using only wrestling moves including submission holds and an airplane spin, I just can't believe that these things happened anymore. Instead, I will just give you a bulleted list of the things that most definitely happen in this movie:

-  El Santo beats up and straight up robs an evil club owner. Not to get information mind you. He goes into his wallet and steals all his money. Then brags about it to their cop buddy.

- Captain America spends the entire movie macking on their lady partner, Julia. Like, to creepy levels.

- Everyone in Turkey who is a cop or a robber is rocking the Paul Kersey look. It is like they hired the stunt cast of Death Wish to make this movie.

And now for Spider-Man's greatest hits:

- Spider-Man goes on a murder spree, focusing solely on people in the shower. He never murders a clothed person except for:

- Spider-Man sends rats down a tube to gnaw a dude's face off.

- Spider-Man and his lady friend, Nadia, have the creepiest sex scene ever. It is just grabbing random hunks of each other's flesh while creepy bobbleheads watch. And get close-ups. Were bobbleheads even a thing in the 70's?


- Spider-Man continues to bust out random Spanish catch-phrases throughout the movie with little to no explanation.

-  Spider-Man uses the ability to duplicate himself to evade Captain America and El Santo for the last thirty minutes of the movie, only to be caught when, well, he just doesn't duplicate himself any more. There is literally no explanation. Just okay, now he's dead this time.

There is a lot more insanity in the dialogue and in the action scenes, but they need to be witnessed naturally. They really do like to sell the fact that El Santo is a wrestler, mind you. He maybe throws a few punches a fight before he starts suplexing and body-slamming all comers.

You know what, I think I can end this review right on that note. Picture a Turkish man dressed as a Mexican wrestler body-slamming the losers of a Paul Kersey look-alike contest.

Picture that and tell me you don't want to watch that movie.