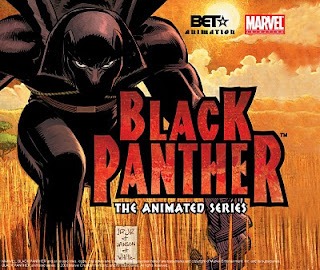 I am totally miffed, but going through this episode, I don't have a cheap reason to post the opening credits again. I agonized over how I could do weave it into this narrative. But, alas I came up short. I guess I will have to go sans ridiculous credits...

Naw, I'm just kidding. If you thought for a second I'd let this post go without the credits sequence, you are an idiot. Here they are again, you jerks:


The benevolent and wise BET give us a "previously on..." montage to open today's episode, and, man, it just shows how low rent this show is when a montage of the best and most important moments is boring. Thankfully, that part is short and we get to watch Black Panther beat up his sister.

Oh, and beat up his sister he does. After administering a thorough beatdown, Black Panther says if Shuri keeps actin' like a jealous bitch, he gon' go tell they momma on her.  They laugh, shake hands, and fight some more.

Meanwhile, in the Monaco branch of Jurassic Park, some straight up Pink Panther nonsense is going on, as we watch Batroc the Leaper break into a a mansion, beat up some guards, and murder a dude. This would be a pretty neat thing, but it is interrupted by Klaw. Klaw is a dude with a scarred up face and an Inspector Gadget hand. However, in the world of Black Panther, his hand is constantly changing into this doofy looking 1980's robot hand. Even when there is no reason for it, Klaw's hand transforms.

I think it is to prove that this show is, indeed, animated. And, really, at times you need that reminder.

Anyway, Klaw talks to Batroc into helping him take over Wakanda. Well, he doesn't really talk him into it so much as offer him oodles of cash. He never names an amount, and deep down I think Klaw is the kind of guy who would just say "oodles of cash."

Then we see Klaw talking to a random dude in a prison who is never introduced or called by name. He is only there so Klaw can flash back to the 19th century and his mega racist ancestor.

So apparently, Klaw's descendants have always been military-oriented cocks, and this dude is no exception. He looks like Teddy Roosevelt after a twelve day bender and sounds like a slightly less friendly Lee Marvin.

Now, Teddy Marvin Klaw is a taskmaster and wants his slaves to carry his stuff into firing range of Wakanda. His slaves, however, have other ideas, so they run away, only to get massacred while TMK calls them black assholes. This is the least offensive thing he says.

This cuts to the soldiers now carrying everything, and one of them asks Teddy M. Klaw if they can ditch the fine china. Teddy don't take too kindly like this, because ditching the china makes you just as bad as "the monkeys" and he does not want to sink to their level.

Long story short, they get to Wakanda, Teddy gets really excited to rape the Wakanda women, then Black Panther unleashes his robot that makes guns backfire and kill you. Teddy tries to make one last stand for bigotry only to die as well.

A random soldier asks for forgiveness from the Panther, but BP only scowls.