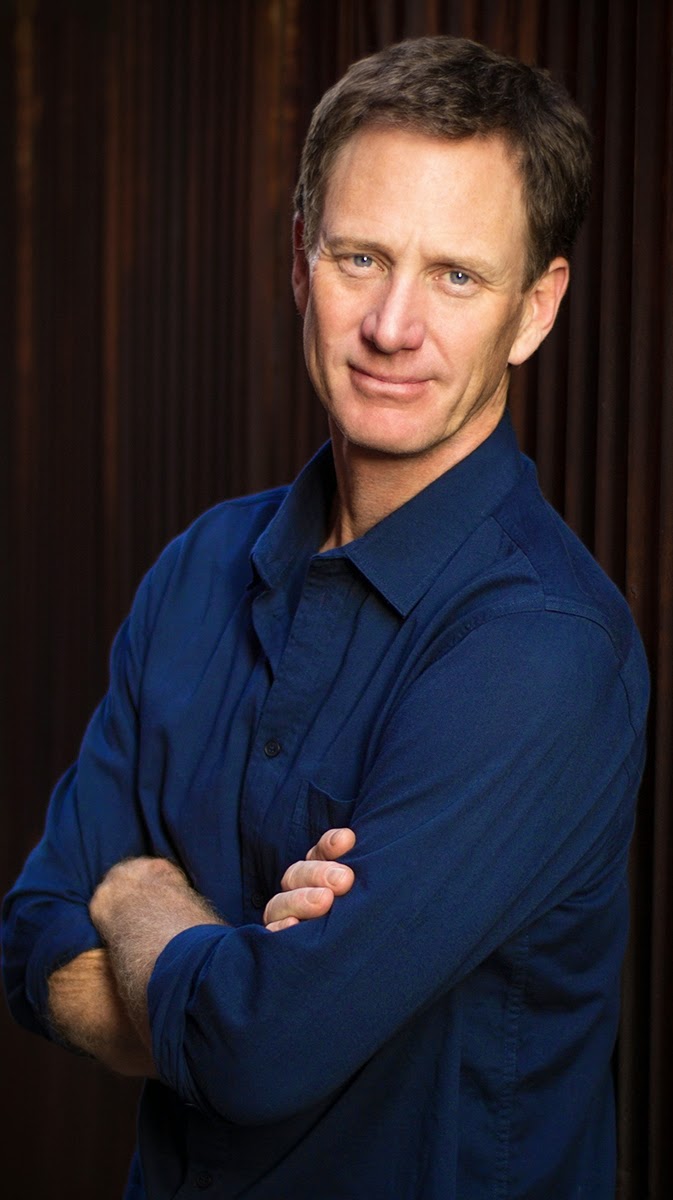 John Stimpson is a cat I had to track down, because I feel like there are so many things right on the outskirts of the mainstream that people just don't respect. I'll admit, it was ninety percent because I am a sucker for Sexting in Suburbia, but I just wanted to pick the brain of someone who brings us those guilty pleasure Lifetime flicks you all know you're gonna watch.

He is actually a Harvard educated cat based out in Boston, and if you need keep track of what he's been up to, you should totally keep your eyes on his personal website.


Well, first of all, a little introduction'd be in order. I'm not gonna lie, like ninety percent of why I had to track you down is you made Sexting in Suburbia, which is one of the two Lifetime originals I absolute had to buy on DVD.

You're a super star!  Thank you.  I am so glad you liked it.

So, I've gotta ask what it's like behind the scenes of those flicks? Give me the inside track on the Lifetime originals machine

We have a really fantastic team here in central Massachusetts.  We've collectively done about 10 movies in the last few years, and many of them have sold to Lifetime.  They've been a really good customer.  Have you watched my TEDx talk?

I haven't seen it, no, because I am the actual worst journalist. Can you give me and the readers the gist of it?

We have been making small sub-million dollar indie films here in Massachusetts for about five years now.  I did a bigger film, The Legend of Lucy Keyes starring Julie Delpy and Justin Theroux back in 2005 and after a successful festival tour, we were able to get a sales company to rep us.  They sold it all over the world, but we didn't get a theatrical release.  We did however sell the film to Lifetime, and it ran for about 8 years.  But it still hasn't broken even, and we may never be in the black on that picture.  What I learned from that experience was to actually make money with independent films you need to keep the budget as low as possible and the concepts sellable to a worldwide TV audience. Theatrical releases are the holy grail, but they are so rare for a film made for $1 million or less.  We spent too much money on Lucy Keyes.  I'm in this business to make money, so that was lesson one.

Yeah, that seems to be the tie that binds the entire indie film community together.

We've also found that thrillers and Christmas movies are pretty evergreen.  They sell pretty easily. Romantic comedies not so much.  We've been really successful with the "ripped from the headlines" style of thriller.  Like Sexting.

Unfortunately it's true.  Mt two favorite movies this summer were Chef and Boyhood.  Both paradigm breakers, but great movies.  I'm frankly pretty sick of the monster/super hero tent pole movies the studios are cranking out just to satisfy big, foreign, and particularly Chinese audiences.  I think audiences are looking for more though.  Certainly the binge watchable series like True Detective, Ray Donovan, and Orange is the New Black are changing what people are craving in a new way.  As people stay home more and more and don't go to the theater, non-commercial television is booming!

I do agree with you on the shift in television changing the way we accept media. I recently blew through the entire season of Bojack Horseman, and that was a phenomenal ride that could not be done in any form. For the record? My two favorite flicks this year were Birdman and Nightcrawler. But that's beside the point. I was wondering, how does a project start for you guys?

My projects all start differently.  I can't say there is one route to a green light.  Sometimes I come up with an idea, write the script, raise the money and just make the sucker. Other times we have worked with a distribution company to determine what they think they can sell.  I'll pitch ideas, and they'll give us scripts to consider.  That's how Sexting came about.  I got a script from our distribution company, MarVista Entertainment.  It was by a writer from Massachusetts, but it focused too much on the girl who died and her story.  The problem was she died. We decided it had to be more about the Mom and her quest to find out what happened to her daughter. So I ended up re-writing the script with Marcy Holland.

I can't even imagine that movie with the teen girl dying.

Funny story about Sexting and shooting the scene where she hangs herself.  The cast and crew were all just fantastic on that project.  We really bonded, and I think it stemmed from the fact that we knew we had something special.  But the day we shot the hanging, we all laughed and said, "Oh, boy! It's suicide day!"  We had to treat it lightly or it would have been too heavy.  Plus, the way we staged it, we left most of it up to the audiences imagination which was a good choice, I think.

Yeah, I feel like you have to kind of have a gallows humor approach to that stuff. It's why, I've noticed, people who work on horror films exclusively are just the perkiest bunch.

So, Macy Holland who wrote Sexting with me, wrote a senior thesis script at BU which turned into the film A Fall From Grace, which Lifetime re-named Last Hours in Suburbia.  It was a beautiful story about a high school girl who kills her best friend in a drunk driving accident (ripped from the headlines...) The ghost of the girl who dies then comes back to help Grace figure out what really happened the night of the accident.  It was a wonderful script and we were thrilled to be able to make another film with Marcy and bring her thesis project to life.

I actually remember watching Last Hours in Suburbia and thinking not only was it a really great story, but the setting alone gave it the feel of a contemporary ghost story that could live on in urban legend. What makes Massachusetts special to you? I love hearing about the film scenes in each city/state.

I've got serious roots here.  I grew up here, my family is here, I met my wife here.  It's home.  I spent 5 years in LA when I got out of college, but knew I would never stay.  I feel like the luckiest guy in the world doing what I do here in central Massachusetts.  I live in a little town called Princeton, with only 3,500 people and one blinking light in the center of town.  I'm only an hour from Boston so I can get into town easily enough, but out here feels like another world.  The tax credit here in our state has been a huge draw and lots of projects are coming to town.  Just recently, American Hustle, The Equalizer, The Judge, Ted 2, and Black Mass, just to name a few of the big films, shot here.  It's been great because the crew base has gotten really deep and very experienced.  To my chagrin, however, I'm competing with theses big projects for personnel.  But we've given a lot of folks a first job in this business and watched them go on to bigger projects and actually launch a career.


I think it's gotta be a bittersweet, almost paternal feeling when your crew quote unquote graduates to bigger projects. , speaking of projects, what's in the pipes? What's next for John Stimpson?

Yes, it's bitter sweet, but very rewarding to see our little chicks leave the nest and learn to fly.  Very much like parenting. I've got a few bigger projects in various stages of development.  Next spring, I'm hoping we can pull the trigger on Crashing Camelot, a story about a streetwise kid who befriends John F. Kennedy Jr. in 1975 just as he is about to lose his secret service protection.  I've also got a story we are developing around the Cocoanut Grove fire here in Boston in 1942.

JFK Jr. is an interesting topic to me because not only is his life fascinating, but he is forever ingrained because, see, I went to Catholic School and the first big project you had to do, in like the seventh grade, was a huge research paper on famous living Catholics. So I am actually super psyched for Crashing Camelot

Yeah, that's a cool story, and it's true.  It's based on a book called, Forever Young, by William Noonan. Great characters in a really cool time period, the mid-seventies.

I'll have to check that book out. Alright so, I'm a Cannon Film junkie, unabashedly so, and I ask everyone this, no matter who they are: what makes the perfect action scene?

Building the suspense behind the action.  By itself action is just action.

If there was one pre-existing film you wish you'd made, what would it be?

The Sting and The Princess Bride. Tie.

Finally: you have the ability to have any actor, alive or dead, in their prime, in your flick. Which do you choose?

Oh, boy... that's hard.  There are so many.  I can definitely say Jimmy Stewart.  Gene Wilder was magical... I'd love to work with Al Pacino, but I'm sure he would intimidate the shit out of me.  Bill Murray would be a dream today... And then the ladies... I'm fascinated by Charlize Theron.  I think Vera Farmiga is stunning, and I had the pleasure of meeting Lee Remick, so elegant.  I could go on and on.

Honestly just spending ten seconds with Bill Murray'd be a dream, but I couldn't argue with any of those choices. You can keep an eye on John with the aforementioned link to his personal site, and also follow him on twitter.
Posted by AJ at 12:00 AM