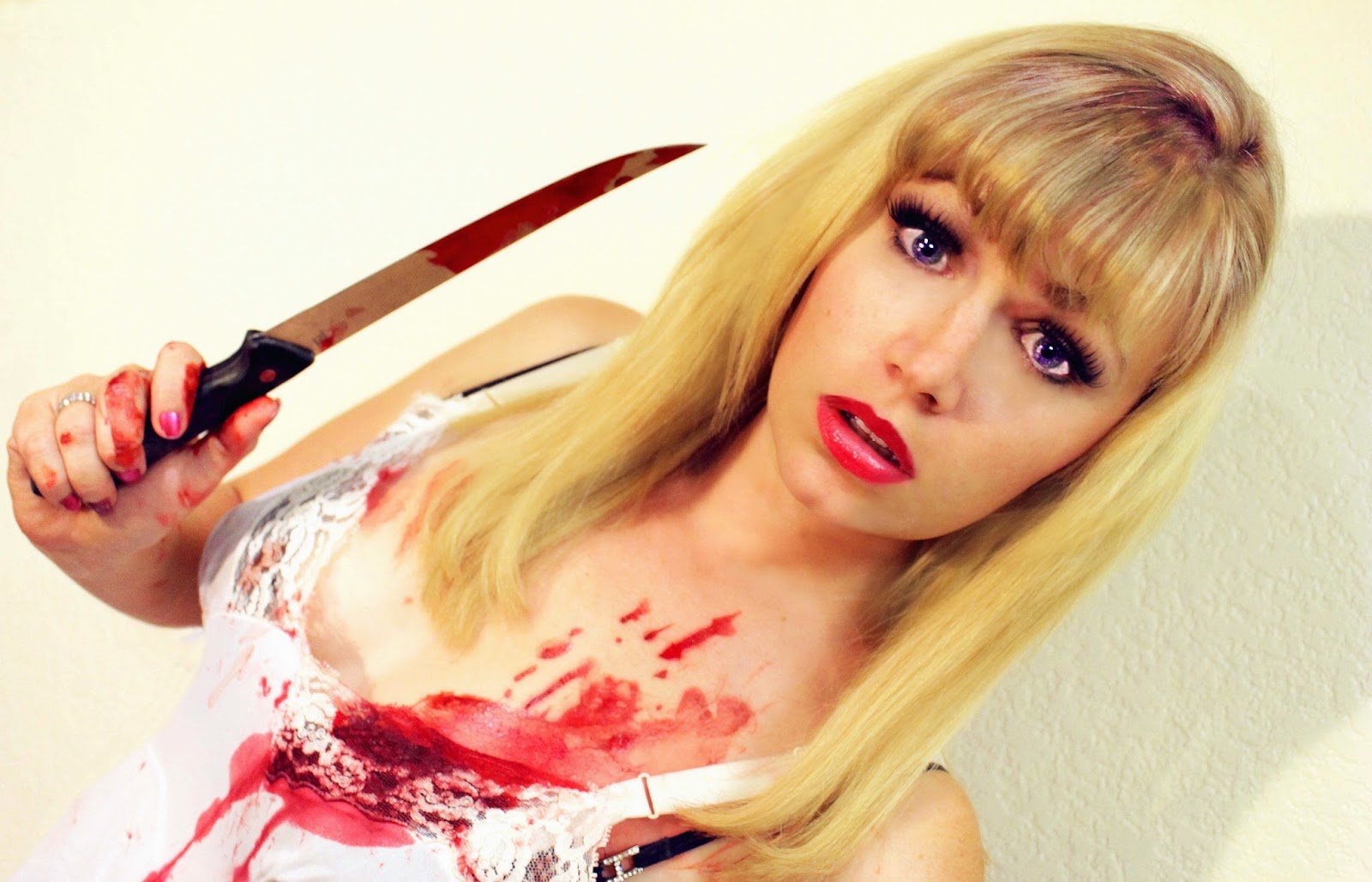 Thank God Jess is a scream queen. Not having a picture of my subject covered in blood for so many weeks felt weird.

The fact I could even pin down Jessica Cameron for any amount of questioning still kinda blows my mind, she's got multiple projects floating around out there on the festival circuit and hovering distribution, and she's currently filming about eight hundred things simultaneously, with even more on the back burner. She's also one of the masterminds behind Kill the Production Assistant, which is something no one who's talked to me for more than three seconds hasn't heard of. She's a writer/director/producer/actress that is right on the precipice of blowing up, so you should hop on that bandwagon now so you can look cool when she becomes the next big thing.

Naturally, since she was pressed for time, I kinda asked her the most absurd questions I could think of and ignored all of that. Definitely check out Truth or Dare (her directorial debut) and  keep your eye out on Mania and Desolation two parts of the Kill the PA experience, Mania being Jessica's second feature as a director, and Desolation starring her.

You've worked with two of my previous interviewees: Heather Dorff and James Cullen Bressack. Naturally this means I have to ask you who among them would win in a fight and how would it go down?

Well,  first I want front row seats to THIS fight! Heather would win because she thinks  fast on her feet and is quite tough both in mind and body. Also James is not much of a fighter. It really would not be much of a fight. I would think Dorff could knock him out in 1 minute or less.
In the biopic of your life, what is the opening scene and why?

Great question, I have never thought of this before!

It would start when I was falsely arrested for a crime I did not commit in my teens -- now there is an opening to a film! This event would change my life in so many ways. It would force me to grow up faster then most, and it was the first time I really saw the dark side of people close to me. It was the first time in my life that I remember feeling genuine fear and great sadness, along with a plethora of other emotions which I utilize in my career as an actress to this day.
Kill the Production Assistant is still in full swing, so I gotta know: what is the one you didn't have enough of in the RV that you wish you'd brought more of?


Ear plugs! We actually did not bring any, and I failed to ask if anyone on the cast or crew snored. SPOILER ALERT, several people did! Some nights we would get a hotel room for the non snorers. It was a hell of an adventure! You can find out more on our facebook page

We all agree that horror is pretty much the greatest genre of all time. What about it keeps bringing you back/makes you feel so much at home? In other words: how does someone as nice as you make something as brutal as Truth or Dare?

It always comes back to fun -- it's fun to be scared. It's fun to act in a film where you are you doing things that you have never had to do in "real" life; running from zombies, hiding from a killer, birthing a spider baby. Horror is the genre that I like to watch the most, I love that anything can happen in a horror film!
Ironically, most of those who work in the horror world are the nicest people you will ever meet -- we just like to watch horrible things happen on screen. I actually tend to think those of us who are very open with our disturbed cinematic tastes are often the most sane, we use film as the outlet for the darker side of our personality!
I ask everyone this, as I am a Cannon group junkie: what makes the perfect action scene?

In my opinion, many factors including camera movement, actors skill, pacing and sound design. The Raid 2 is filled with powerful action sequences, if you have not seen it yet then I highly recommend that you do. There is this epic car chase scene in which they actually passed the camera back and forth to multiple camera operators while filming. It's a perfect scene.

Finally: is there anything you want to ask me?

What is the one question you wanted to ask me but thought better of it and why?

It's not so much a single question, but, basically, okay, I am gonna ramble on here a bit. I remember years ago watching a documentary, I forget the name, where the legendary band Girlschool is just hanging out on their tour bus talking to some guy. About five, ten minutes into the conversation, one of the cats in the band turns to the interviewer and goes: "You know, this is the longest anyone's gone without asking what it's like for us to be an all girl rock band." I just kind of keep that quote in the back of my head whenever I'm asking anyone a question and will straight up not ask anything if it seems like someone probably has asked it before. I'd rather have the little site no one reads that asks you to what would happen if your friends fought than be part of massive media conglomerate number 78954 asking you for the umpteenth time what it's like to be a lady director, no?
Posted by AJ at 12:00 AM