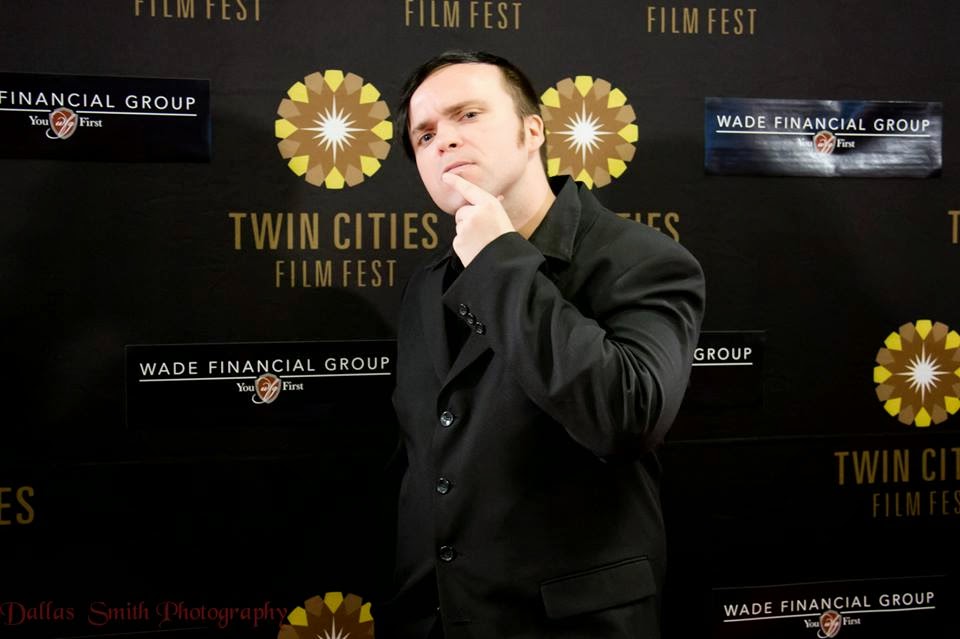 I am legitimately shocked that Brandon did not punch me in the face what with how much I nagged at him to get this interview done. Well, I mean, he couldn't physically do it, but whatever the internet equivalent is.

Brandon's an actor/director who's been carving quite a little niche path, usually with partner in crime Devanny Pinn, in the independent genre scene. His current feature, in post-production right now, House of Manson has got a ton of buzz, and you can watch the trailer for it here.

It'd be almost impossible to keep track of everything he's doing, so I'd suggest following him on twitter. And also giving him money by buying his films.

You could rent them too, but come on now.

You played The Question in a fan film by Chris Notarile, (who made those Power Girl shorts I absolutely adore.) I've always been fascinated by that superhero fan film community. What was that experience like? What all does the making of something like that entail?

Those were A LONG time ago now.  I believe in early 2007.  It was surreal because I had a complete mask over my entire face, and vision was quite limited, which of course made the action sequence in the second segment pretty...challengingto say the least.  It's been so long now I wish I could tell you how we pulled that off.  Most of it was done very guerilla-style, including the shot of The Question dropping a briefcase bomb off in a populated area, which I believe was the Path Train stop in Jersey City, just across the water from New York City.  YOU'D THINK people would be more mindful about mysterious masked men dropping briefcases there and walking away.  You'd think...

Speaking of blasts from the past, you were on Sesame Street! You have no idea how jealous I am of this. Like, I don't even know how to phrase a question here. Tell me all about Sesame Street!

That's another old one.  It was on a greenscreen stage.  My head was composited onto a letter of the alphabet.  I never saw the segment (and I think the IMDb listing is incorrectly dated), but I believe I was the letter P.  I have to admit that I really only loaded the IMDb credit for sheer comic effect and as a discussion piece.

I used to say things such as “you wouldn't believe Elmo's crack-cocaine habit!”, but then I realized I could easily be slapped with a libel suit from Elmo's reps.

I am actually super stoked to see House of Manson. What drew you to the Manson story?

It was actually Devanny Pinn's idea.  Of course I was familiar with the story, but I'm not a, dare I say it,  Manson “fan boy,” by any means.  That being said, I DO enjoy stories that explore psychology, so THAT is what drew me to it -- not murder or carnage.  How did this 5'2” ex-con get all of these younger people to follow him?  Young people NOW still “follow” him in their own way.  THAT is the interesting part, to me at least.

How does a project come into existence for you? What is step one for a Brandon Slagle feature?

Well, there is no easy answer to that.  At this point, the subject matter HAS to be something marketable; it just has to.  When you're trying to work towards higher levels in film, the hard, solid truth is that you have to make a product -- a product that someone will want to distribute, market, and sell.  Luckily we've been able to come up with takes on concepts that have done just that, for better or worse.

I won't tell you which is better and which is worse by the way.

I first came aware of you, as I'm sure a lot of people did, by just how cool the artwork looked for The Black Dahlia Haunting. How important to low budget film making is marketing art?

It's perhaps the most important part of it, above all else  -- especially if your film doesn't have household names in it.  If you don't have the marquee name on the top of the box, you have to have artwork that will visually GRAB the consumer.

Speaking of budget, especially with genre pictures, you've gotta come up with a lot of creative problem solving to get the effect/shot you need. Gimme some examples of ones you are particularly proud of.

If you're making a low-budget film, something that will come in handy is if you write around things you have access to – actors, locations, crew, effects, etc.  That's what we did with The Black Dahlia Haunting.  We had access to the location we used for the “hospital” (which was a post house in Hollywood – I won't tell you which one), the cast and crew's homes/apartments, and our friend Britt Griffith from Ghost Hunters.  These elements really set the film up to be a relatively easy shoot.

Something a little more directly in-line with the question though, could become the stuff of legends.  We were shooting pickups for Dead Sea - and we had to do the best we could with what we had because the creature was never shipped to us, which is why there is so little of it in the film and is another story entirely.  So we bought a swimming pool to do insert shots of the small lampreys, which had been built by our FX artist Adrian Marcato, and a larger monster Adrian created last-minute once we were certain our ACTUAL creature wasn't making it to UPS.  Our lights had been stolen a couple of months before, so we had to create our own flood light to place over the pool since most of the shots needed the night time aesthetic.

We needed something to anchor the lights, which were worklights --  the type you find on the side of the road plugged into generators during highway construction --  above the pool, something strong to keep them from falling in and electrocuting us.

We exhausted all of our options before Britt Griffith, who was a producer on this film,  came up with a novel idea -- weigh our makeshift “crane," built with 2x4's, down with a COUCH.

Yes.  A couch.  It became known lovingly as “the safety couch” in the stories that followed.

I DO NOT RECOMMEND DOING THIS UNLESS YOU ABSOLUTELY HAVE TO BY THE WAY.  The thing is though – you see last-minute fixes such of this in big budget films too.

This space is reserved solely for you to tell pirates to fuck off. I'll come up with a question around it in post.

EDITOR'S NOTE: I was too lazy to come up with a question, so just imagine Brandon decided to cut a wrestling promo mid-interview. Seriously though, Camp Counseling's official stance is fuck piracy.

If you notice food disappearing from your refrigerator – it's not your brother, your drunken step-father, or your roommate's significant other.  It's me.  Eye for an eye.

With House of Manson in post, I gotta ask: what's next? I know there is no way in hell you don't have something else in the pipelines.

I'd love to tell you but, as of this writing at least, there isn't anything certain.  I was hired to write a script based on a treatment someone else wrote, but that's it at this point.  There have been two films that didn't work out, both “bigger budget, " because the deal wasn't right for me.  It's nothing bad – this sort of thing happens all the time, but no one speaks about it.  Who knows, by the time anyone reads this, a deal could have been made on something else...

I'll leave it at that.

I know you were close with Wayne Static. He is actually part of one of a very small handful of truly great high school memories, so any stories about him would be super cool here. His passing really kicked me in the gut this year.

In 1999 or so, he taught me what stop-leak was.  I had a blown radiator and I remember him maneuvering his hair under the hood of my car and schooling me about the miracles of stop-leak.  I hadn't spoken to him in years, since I stopped doing music,  but I can honestly say that to this day, I still remember him as one of the most thoughtful, generous people I've had the pleasure of knowing.

I ask everyone this, as I am a huge Cannon films junkie: what makes the perfect action scene?

Cannon films were a bit part of my formative years of course.  I'd say that the choreography needs a dose of kinetic energy in it, a dose of tension -- of course the hero usually wins, but you have to make the audience doubt it -- but most of all you have to be invested in the characters -- on BOTH sides.  Otherwise who do you root for?  You need a bad guy you either completely love or hate and the good guy needs to be endearing; it goes a long way.  Back in the day, Jean-Claude Van Damme pulled this off marvelously.  It may have been his sort of “fish out of water” innocence that he had,  but looking back you can certainly see why he was a star when he was.

Finally: Is there anything you want to ask me?

Albert Pyun's CYBORG – the “workprint” that was released via Pyun a few years ago versus the theatrical cut which was edited by JCVD:discuss...

I told you this when you first sent in your answers, but it bears repeating: god damn you.

I ain't gonna go into detail on the actual quality of the shot choice and editing, as this totally couldn't be the final version Pyun wanted to turn in, or the studio had every right to steal it from him. Then again, just hearing his soundtrack choices should have been enough. Like, have you ever seen Giorgio Morder's Metropolis? You know how the soundtrack is just so crazy to work?

The workprint version's soundtrack is the direct opposite.

Now, no one can say that the story of Cyborg was deep and enriching, but somehow the workprint's arbitrary change to the thrust of the story makes it dumber.  For those who haven't seen the movie,  basically it's a post-apocalyptic wasteland and the protagonists are looking for a cure to the plague that is ravaging the land. In the workprint, the story is about the protagonists trying to bring back technology and electricity, like their some kinda Mad Max Ben Franklins or some ol' bullshit.  Thing is, "technology" is never really explained, and Fender prays to Satan like, all the goddamn time in it, which actually makes the crucifixion scene from the theatrical cut have a little more context. Also the Cyborg has a robot voice in it!

I really, really hate the workprint. The assault on the colony is completely missing, and it's just a narrative mess, and it makes me sad as Albert Pyun is one of my favorite guys. Watching it felt very much like the first time you find out adults are fallible.
Posted by AJ at 12:00 AM