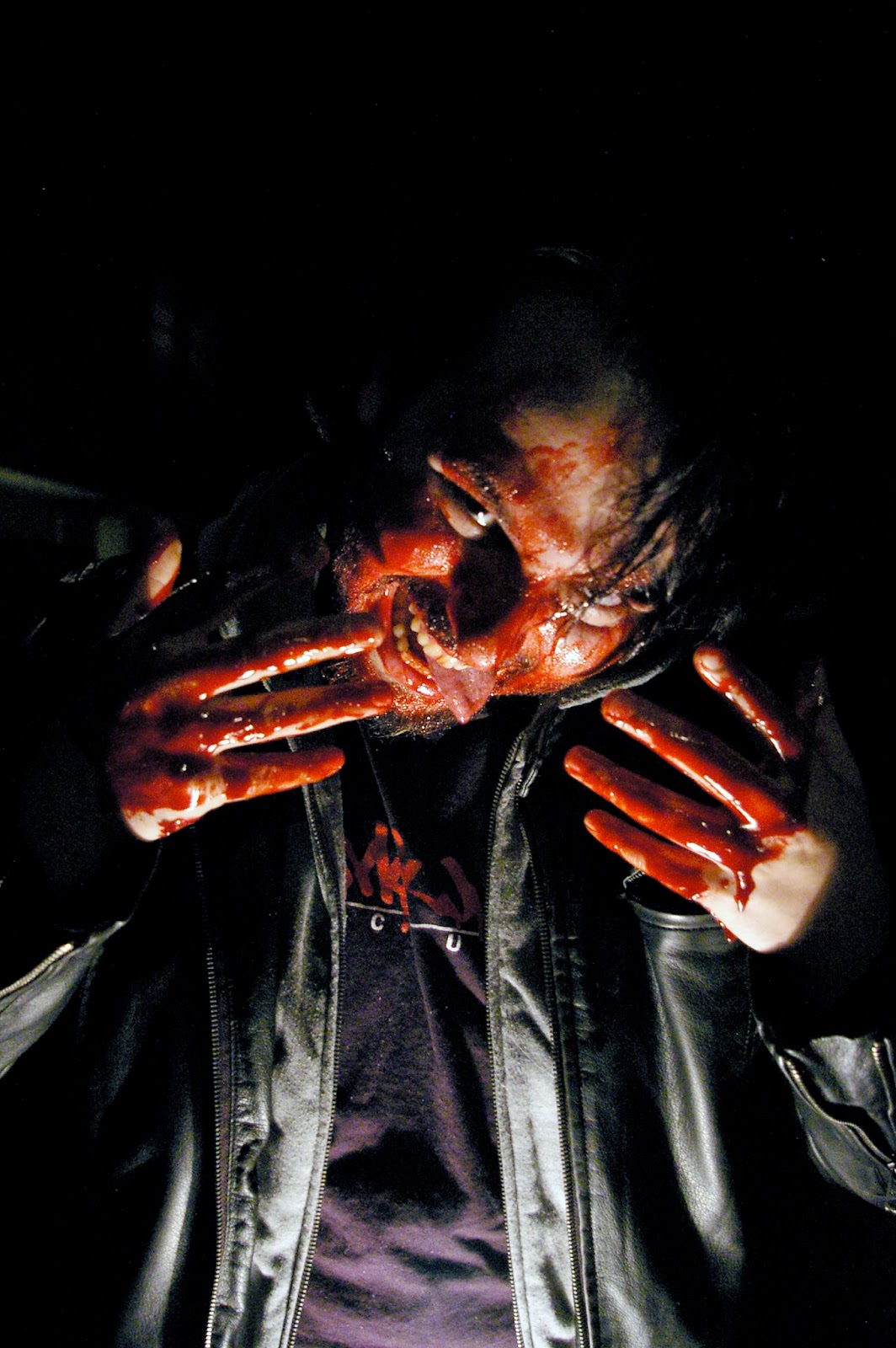 Look, you can't not lead off with a picture of your subject covered in blood, can you?

So, this is my new best friend James Cullen-Bressack. I've been shilling the hell out of his Animal Planet creature feature Blood Lake: Attack of the Killer Lampreys for months, and naturally, he had to be my first get. He's got a damn impressive pedigree, with  his dad, Gordon Bressack writing for Animaniacs and his mom, Ellen Gerestell, being a voice actress in pretty much every cartoon you wax nostalgic for from the late eighties to the early nineties, and man he's got quite the back catalogue, which you can pick up on Amazon. I recommend 13/13/13 as it's got a pretty decent cult following and might fall into your wheelhouse or, if you're feeling that urge for brutality, Hate Crime. And the aforementioned Blood Lake?  Totally streaming on Netflix!

His latest flick, soon to be released, is Pernicious, and I for one have hype. Check out the trailer here, and be sure to follow him on Twitter.

Okay, enough of the carnival barker act, let's get into the interview, shall we?

AJ: I'm just gonna jump right in and ask. how does a project start for you? Do you already have a project in mind or do people approach you with pre-packaged ideas?

James Cullen Bressack: Some of each really. It's a bit of both. I'm a hit man and a mob boss. Depends on the project.

So, something like Blood Lake (NOW STREAMING ON NETFLIX), by The Asylum would be more a hit job than something you orchestrated?

Yes. I was a gun for hire on that one. Doesn't mean I love it any less, just means I spent less time dating it.

I know it. I've experienced it, there has never been a woman or a project that I have met or seen that I haven't fallen in love with for 15 minutes or 15 years.

A damn good attitude to have. Now I mentioned The Asylum earlier as a not so subtle segue in to this. I just love those guys, as they have this brash and flagrant air to everything they do, from stuff like Transmorphers to Sharknado. How was it working inside that system?

When you make a film for Asylum you are making a film for Asylum. It is a very different way of doing things, but they have a mold that works for them. Those guys are geniuses. I've learned so much working with them and would do it again anytime. They know how to make a movie that makes money. In this business now a days that's impossible.

I look at a lot of what's coming out in the multiplexes now, and everything is super safe. It's like an inverse of the 80's. Nowadays pretty much anyone can make something look semi-professional. Much like what happened in when the home video market first opened up.

Theatrical took a big nosedive this year. Mid-range movies are gonna be phased out. Only massive scale ones and small indies. To be a filmmaker you have to go out and create. My first 3 features had a collective budget of $25,000 total. One was made for $500. I started to build a career off of that. Find your story and tell your story. Budget isn't an obstacle it's just a tool to tell your story


Exactly. And, honestly, creative ways to solve any budget hiccups re: effects always stand out more than just throwing money at a problem. Not so much in a noble sense, in more, it forces creativity. And being creative and breaking through whatever mold and hurdle you have is why I keep coming back to the indie genre scene.

I agree. People say my film Hate Crime is so brutal. There is literally no onscreen violence, just the aftermath. It's all about what you think you saw.

I like to call that the Texas Chain Saw Massacre effect. It's a great tool to use, because what is implied will always be worse than what you can show. Even if you're Salo or an August Underground flick. Even one of the Guinea Pig films, the mind will always freak you out more.

Yup. I heard they are doing a guinea pig remake series. I'm waiting for a phone call

Oh man I would sponsor that in a heartbeat.

Stephen Biro did the first one. I want to do one of the eight. Seriously though, I was born for that. Biro, if you are reading this, call me.

I will do my best to boost the signal so he sees it.

[Laughs] He distributed Hate Crime, so he knows me

I want to do He Never Dies or Devil Doctor Woman.

Interesting choices. I'm just stuck on aquatic creatures because A. Blood Lake and B. They seem to kill Christopher Lloyd a lot lately.

[Laughs] See Pernicious then you'll see why. Torture is my thing.

Yeah. I had three days to write it, but yeah. It's one of my films but it's for sure the one I like the least.

[Laughs] Some people love it!

But as a dude with a degree in screenwriting, I gotta ask, how fucking crazy was writing a script in 3 days?

A bottle of Jack Daniels.  I think I have a vine where I'm literally losing my mind

That is nuts. I once had to write an entire screenplay in 18 hours, so I know the pressure. My poison was gin, however.

A hundred and twenty-three because cutting was just not an option by the end.

Jeez, was it any good?

It has moments? It was basically the story of a guy who fakes cancer in order to make it as a big shot in Hollywood. So, you know, the most cliched idea ever.

Sounds fun. Let's have him fight a sharknado.

You reading this, The Asylum? Although, actually, I think he'd have a better chance against Sharktopus, since he's fighting everyone this year. Gotta be wearing on him.

This is true. I don't wanna start a SyFy turf war in this interview.

Okay, going through your IMDB credits, you've done pretty much everything but craft services at this point.

I should do that ASAP.

You gotta, man. You're still young and spry. So, you've got a ton of stuff in various stages of production. Anything you can tell me about what's coming up in the near future?

I'm doing a music video for Riff Raff. Music videos are fun. I recently did one for Borgore. And then I'm kinda just waiting on dates on a few different movies

You know, I've never talked to anyone who's directed a music video.Walk me through the process, a little bit. I'm actually totes fascinated at how something with so many quick cuts is created.

It's like making a movie on crack. Basically,  think the drug scenes in Requiem [For a Dream], but that as a style without the drugs. You can basically do anything in a music video -- nothing is too weird.

That's gotta be super fun to fuck around with.

Now, I pretty much ask everyone this, as I am a Cannon Group junkie, and I don't care what genre you work in, so: what do you think constitutes the perfect action scene?

The Raid: Redemption. That movie is perfect action

No one could ever argue with that. I saw it in theaters twice. Once to see the movie. Once to watch people's reactions.

Anything like that is perfect. It pretty much changed the genre

That was just next level choreography. Like, I've always had a beef with modern action flicks having the camera be the star of an action scene and not the actor. Then Rama makes a fluorescent tube terrifying. But, naturally, we have to go into it. Dredd vs The Raid. Thoughts?


I dug both films. I think The Raid was better, but  still both films are fun.


Oh most assuredly. And now we have the American remake of The Raid to look forward to. Hopefully they lock down Tony Jaa for The Raid 3 to make up for it.

That would be rad! I shot in Thailand for three months on my film, Pernicious. It's by far my favorite film of mine

Alright, sell Pernicious to all the cats reading this. Mostly becuase I'm a terrible journalist and haven't seen it yet.

I always have some pretty extreme violence, but the stories are all rooted in the people; truly understanding and caring about the people that are going through the inciting incident. At their core level, all my films are about people trying to hold themselves together while falling apart. The more we humanize a victim and the more we humanize evil, the more it feels like it can really happen. I feel like Pernicious is a unique journey that I think everyone will have some fun with. Although dark and gritty, the film is very cinematic and beautiful. I worked extensively with my beyond talented DP, Seo, to develop a look for the film that I feel opens it up just enough while still keeping a claustrophobic feeling. Trust me, it’s my most cinematic film yet.

I would say that Pernicious is not only my scariest film, but also my best film and by far my most violent.  I wanted to have ultra realistic and disgusting FX in it, so I made sure we hired Jermai Cruise from Toe Tag, the genius behind the FX in the August Underground movies. I promise this, if any, is the film of mine to see.

See, you had me at August Underground. I even mentioned them earlier! Alright, I like to wrap these things up with questions that goad into a good exit line. If there was one scene, in all of horror, that you could say was your creation, what would it be?

Any scene in my movies. I don't wanna make other people's films I want to make my own
Their films inspire me. I grew up on film. I want to have my films inspire others. We have to continue to create and thrive or all is lost. It's a cycle. The ones reading this will one day be the ones writing it.

And, there you have it. You can't really probe and pry when you get such a perfect closing line, can you? You should definitely check out everything James is putting out. He's got an enthusiasm that oozes throughout his projects. He'll be a force to be reckoned with in the near future, just you wait.
Posted by AJ at 12:21 AM