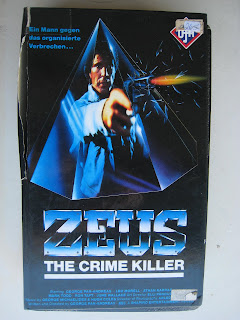 I am going to level with you. 90% of why I tracked this movie down was because the guy who played Hitler in Hard Rock Zombies plays the President of the United States in this movie. That fact, combined with the fact that those are the only two film roles he ever had made me need this movie even more than is remotely healthy. I searched and scoured for this movie for years and always seemed to just miss it. I finally snagged a copy on Monday and I don't know how I was able to live without it. Believe me, it was worth the wait, as this movie is straight up bonkers to the umpteenth degree, and is worthy of being your Independence Day weekend entry.

So, The Crime Killer. Man, it sure is a movie. It had a beginning, a middle, and an end. It was filmed, presumably, with a camera or camera-like device. People pretended to be people they were not. And, that, my friends, is all that is deciperhable about this movie. It is a glorious hodge-podge of stupefyingly pathetic performances, characters that come and go willy-nilly with little to no justification, plot points that exist only because something has to happen when the camera is on, and a main character who is the most effeminate loose cannon cop to ever grace the silver screen. I will try to piece what I saw back together for you, but I implore you to track down a copy for yourself. I am not sure I believe I saw what I did, and would like a second opinion.

The Crime Killer starts off with our hero and Greek cop extraordinaire, Zeus and his black partner (no idea how many days from retirement he is) in a shootout in an incredibly dark alleyway. After killing a few punks, it looks like all is clear and maybe we will get a credits sequence. But things are not ever this easy. It turns out that a bunch of punks were hiding in metal trash cans that just kinda litter this absurdist's vision of an alleyway. They jump out in slow motion and mow down Zeus' partner in a hail of really slow bullets. They also shoot Zeus. We find out that these guys are evil mobster/drug dealers and that they are working with dirty cops when two dirty cops show up and Zeus kills them.

That above paragraph is less confusing than the actual sequence, mind you.

We get a brief glimpse of Zeus' home life next. His wife has got to be like 25 years younger than him. We learn that Zeus pretty much lets anyone ever live at his house, because he has three roommates and is now inviting black cop's wife to life with him. Her function is to bring the proper levels of sass to any given scene that has a sass deficiency. I want to write more about what happens at home, but all we find out is that Zeus really, really likes kids. It is one of the many creepy personality traits our writer, director, and star George Pan-Andreas felt this movie needed. Bless his ineptitude.

Zeus is called in to see the chief of police. We know he is the chief of police because anyone, other than Zeus, who has any position of power has a gigantic 1800's oil-baron mustache. They are all the Monopoly guy. Apparently, shooting cops is frowned upon. But the logistics of the meeting are not important. What is important is that we finally get to realize that The Crime Killer is the most homoerotic movie ever made. It is gayer than Rob Halford and Freddy Mercury making out with a Will and Grace script. You can just feel the pangs of a forbidden love in between every line of dialogue between Zeus and the chief this early on and it is hilarious because the chief has less acting chops than Dean Lerner.

Zeus is kicked off the force because of damn politicians, a line that is repeated about seventy-five times in three minutes, and we immediately cut to President Hitler addressing the nation. He got a letter from an old woman about how crime is out of control, and he starts choking back tears. He decides that enough is enough and he is going to be extra super special tough on crime. He declares war on drugs.

Two drug dealers watch on as the President gives his speech. They get angry, and decide that if the President is going to have a war on drugs, then they will kill the President. I mean, being more cautious and maybe moving into a different racket might have been the wiser choices, but fuck, this is The Crime Killer, and thinking rationally is, well, the biggest crime of all.

After Zeus stops blubbering and sobbing over not being a cop anymore, a whole lot of nothing happens until the chief shows up like nothing happened at all and asks Zeus to help him with a case. Their forbidden romance has hit a fever pitch, so of course, the pretense is dropped when he straight up tells the chief he loves him and that the chief broke his heart in a scene that completely feels to be Zeus asking the chief out on a date instead of the chief needing help to fight crime.

The chief leads Zeus to two ladies with their throats slashed. One of the ladies is the ex-wife of the President, and Zeus, using astounding logic, figures that if the president's ex was murdered, than only the president himself could be next!

This springboards into Zeus' creepy obsession with children rearing its ugly head again, as a little girl was a witness to the crime! He makes her look at pictures of killers while playing a game who's rules we are never actually given. She identifies one of our couch-potato drug dealers. So, Zeus goes undercover as a gardener to get facts.

At this point, seriously, why did he lose his badge? He has done more police work than actual police officers, the dirty cops never show up again, and, you know what? I gotta stop thinking and focus more on Zeus' gardener adventures.

Zeus pretends to be a gardner to try and get intel on what our evil president killing drug dealers are up to. Apparently, they throw bitchin' parties for oil sheiks complete with topless tennis, and a mysterious woman on a balcony who doesn't show up again in the end. Also, they hang out with the Yakuza. Zeus gets discovered, and a Greek accent pretending to have a Mexican accent is pretty much the funniest thing in the world. Oh, and they kick the snot out of him for what seems like a billion years.

While Zeus is busy licking his wounds and having his wife nag the bejeesus out of him, the little girl witness gets kidnapped! I wonder how they saw through his amazing disguise. Zeus, fed up with all this bullshit, immediately starts flashing back to the Vietnam War. He then demands the Chief to let him get his old unit from said war back together to find Emily.

Yes, you read this all right. And no, none of this back story was every mentioned before, nor were any of his war buddies ever seen before this moment. Oh, and, in case you were wondering, this is the exact moment this movie just completely drops the charade it cares about making sense. Because, immediately after this, shit gets crazy.

Zeus and his two war buddies drive out into an abandoned field. From within the brush, a drill sergeant emerges. He yells at them and demeans them, and makes them sign a piece of paper saying that the government now owns them. He then puts them through the lamest boot camp sequence I have ever seen, and interspersed between it are flashbacks to Vietnam, with the least convincing soldiers ever yelling at our trio. It is the most surreal experience I have ever had, and it is never explained what the whole point of it is, because once it is over, the drill sergeant then retreats back into the brush never to be seen again. I just know I could not stop laughing.

From this point we get to bear witness to:

- Every villain in the entire film knowing Kung Fu. All of them, from the junkie in an abandoned alley to the border-line morbidly obese drug dealer

And those are just some of the all-out crazy things that happen in this movie after the training sequence. It just turns into all-out anarchy for no good reason. They start jump cutting between idiotic ideas, scenes, and even right over lines of dialogue all to go for the gusto straight to a finish that makes even less sense than what has come before it.

It has taken me over 18 hours to write this entry. Normally, I can bang one out in about 3, but man, this movie just burrows its way into your head and you just cannot seem to repeat what it is you just saw. You loved every minute of it, but you just can't quite fathom what the hell it was. Immediately after the movie ends, you are going to have to repeatedly ask yourself what was just watched. You will have no idea how this movie could exist. You will have no idea if it was all just some fever dream of cops who really want to kiss each other. You will be tempted to re-watch it. Give in to that temptation.
Posted by AJ at 11:45 AM