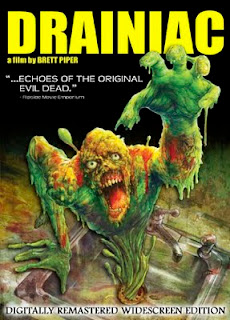 Drainiac is a movie that has absolutely no tension whatsoever. It absolutely refuses to let you care about anything that is going on or fear for the lives for anyone who is a main character. It throws subplot after subplot at you, as if you might actually actually believe they are going somewhere, only to have just another thing happen to make you forget that something interesting was dropped again. The movie just steadfastly defies any and all inclinations to be adequate at anything. In short, Drainiac is the epitome of everything you should not do when telling a story, and it is all the more hilarious for it.

The movie starts with politically conscious hobos waxing philosophical. They are incredibly eloquent. They were probably philosophy majors. One hobo besmirches America, and that just doesn't abide with the other hobo, so he tries to beat him up. Well for that and for the fact he tried to steal his hooch. You do not fuck with a hobo's hooch. In the midst of their Bumfights segment, the two hobos see a spooky house. They go in and the America hater gets melted by weird green goop.

Of course, none of that matters because it was a pointless prologue meant to pad out a pitifully short film. This is not a knock on the movie. I just wanted more, but good old Brett Piper of Kinky Kong fame just did not want to give me any.

So now that the homeless have been mocked thoroughly, we get to meet our main character, Julie. She lives with her jerk dad and her mother is dead. I can relate to Julie as I have been in that situation. However, unlike Julie, I did not dream of monsters raping and murdering me. Clearly, Julie is jacked in the head, and this will come to be a plot point no one really cares to use unless they need a reason for her to be angry.

After being dream raped, Julie goes for a run and hangs out in the cemetery to gab with her dead mom. I am not ashamed to admit I have done this too, but mostly to ask her where she hid things. It's been a year now, and there's still some junk I have never recovered. That woman was crafty. Always movin' things when I wasn't looking.

Moving away from the recent trauma of losing a parent, Julie's jerk dad bought a shit house because he thinks he can make a mint selling it. Said shit house also happens  to be the place where our Communazi terrorist hobo friend found himself deceased, we just don't know that yet. It is just super, duper implied.  Jerk dad is gonna make Julie clean this house, because he hates women.

Speaking of Julie's dad, every time he talks to her, I am outright amazed he does not backhand her. That is just the type of dude he is. He is every Lifetime movie abusive husband rolled into one horrible person, only very poorly acted. It adds to his roguish charms.

As they are pulling out of the driveway, Julie's friends pull up in a jalopy, and angry dad is super nice to them. Julie is friends with stereotypes. There is pretty girl, other pretty girl, and huge nerd. Huge nerd is the one with the penis, but he isn't a threat to them since he is so gangly and awkward he knows, deep down, they will never wanna knock no boots with him. Julie tells them how sweet her plans for the day are, so they immediately ditch her for the mall.

Describing the plot of this movie is an exercise in tedium. I have said it a million times, but, I am dead serious when I say this movie is: things happen, then the credits roll. I can't even backtrack and pretend like anything that happens in this movie matters. Not that anything that happens in any of the movies in Camp Counseling matters, but this is taking it to whole new extremes. Things that happen from sequence to sequence in Drainiac do little, if not nothing, to actually push the pencil-thin story any further.

It is really quite difficult to articulate why this makes the movie so enjoyable. I have seen some low budget movies, ones with budgets even lower than the reported ~$8,000 that it cost to make this masterpiece employ some amazing tactics and storytelling twists in order to put something worthwhile out. In this movie? Not a chance. It just plum does not care about anything.

Characters literally stroll in and out of the movie like it is no big thing, and we are supposed to pretend that any of them is a big deal. It is actually hilarious.There is one character, Plummer, who is the savior of our quartet of stupid teens. He is introduced as a guy who was just kinda walking around, looking for ghosts to bust. He stumbles upon things being amiss and immediately deduces it looks like the house that has a case of rickets.

Top that with the fact that, in a movie where a demonic house is murdering people, only four dudes die. Even more egregious is the only breasts we see are an evil ghost's and the main character's. That is not how horror movies are supposed to work! We need to see everyone naked but the main character!

But, considering the threat in this movie, it is almost passable. The main villain of the movie is haunted water.

I mean, until the third act, which I will actually describe.

We are racing towards our ending, and though he has only been in the movie for like 5 minutes, Plummer convinces Julie that she should let him exorcise the house. The group agrees with him because it said to in the script, and the movie was almost over, so something interesting had to happen. That and he had business cards, and when an elderly faux-Irish man hands you a business card saying he is a ghostbuster, you take his word for it.

In order to exorcise the house, the people there all lay in a pentagram and stare at the ceiling while neat looking claymation effects circle around them. That is all that happens. The third act of Drainiac  is pretty much laser Floyd; just ten minutes of creepy shit on the wall while an old Irishman curses at demons (which, I guess, is better than listening to Dark Side of the Moon). And just when you think that you will get bored with this, the demons drown the old Irishman. Then Julie sees her dead mom, and the group walk out of the house. The end.

I shit you not. The final confrontation is the group of teenagers walking gingerly out of an evil house that, really, only killed jerks and the Irish. And, in all fairness, aren't they one and the same? I bet Plummer was drunk, anyway.

Before closing this thing out, I would be remiss if I didn't mention the sweet special effects.When watching this movie, you have to keep in mind that it was made in the late 90's and released in the year 2000.  Drainiac likes to boast the fact that all the effects were practical, which seems unreal for a horror movie around that time, but that is a straight up bonkers claim. See, the version you will be able to see is actually a revised version from 2007. Now, usually revised means a director's cut or some such nonsense. Not in the case of Drainiac. See, Brett Piper claims the movie wasn't finished when it was released, so he went back and touched up the special effects by adding incredibly cheesy CGI to it. So, you have the effect of what might be impressive in 1987 being coated with a slick veneer of 1995-level CG. It is quite the treat to see double dated special effects. And, the irony is the effects he didn't touch up look so much better than the ones he did. When a claymation demon spider looks more believable than CG water, you have struck gold, my friend.

I am actually kinda miffed this entry is pathetically short, but there isn't much to say when talking about Drainiac. Again, that is not a bad thing, but it just comes with the territory. I said earlier this movie is short, so the entry about it should be too.
Posted by AJ at 5:22 PM