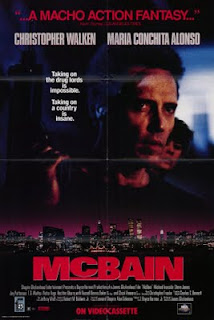 This is a movie where Christopher Walken and a couple of buddies decide to lead an army to take over Columbia because one of said buddies was killed and Maria Conchita Alonso asked them to. I feel like I could just stop right here and that would be enough for anyone sane to need to see this movie. Alas, I am too in love with writing way too much about movies only three people saw to do this. But, I guess, that's why the two dudes following this blog keep coming back.

That and I pay them to.

But hey, let's delve deeper into the world of McBain, which is pretty much exactly what you think it is: a Simpsons joke filmed, only instead of Ranier Wolfcastle, they hired Chris Walken. I feel as this is a suitable replacement, and after watching the movie, you will too.

The flick starts with the Vietnam War. As this is an action movie following the 80's template, all things come back to trying to re-win this war. It is a thing 80's action movies love. They want a dang do-over, and if the real troops won't do it, why not send in Sly Stallone or Chuck Norris? They know how to do it. They get results.

McBain is a POW, and even though the war is declared over, some soldiers who love America swoop down and rescue him from the cage where he is kung-fu fighting a buff as hell Vietnamese guy. Yes, you read that correctly. Within ten minutes, you see the guy from The Dead Zone kung fu fight. Also, you get to see Michael Ironside with sweet 70's mutton-chop sideburns. I feel that these two things alone are reasons to see the movie. But, I digress.

So, McBain gets rescued by a Latin dude named Santos and his unit and owes him a favor for doing this. To make it symbolic, for some reason, Santos rips a hundred dollar bill in half. One half for him, one half for McBain. It is a symbol for a dude to really owe another dude a favor, because a hundred bucks in the seventies was a good deal of scratch.

Flash forward to 18 years later, and, naturally, Santos done gets himself killed. Turns out he was Columbian, and for some reason was still part of the United States Army. He wanted to overthrow the evil president and set his people free. Also, he has a sister played by Maria Conchita Alonso.

Action movies loved Mrs. Conichta Alonso. She never got to play the hero -- that was saved for such acting dynamos as Brigitte Nielsen and Cynthia Rothrock -- but she always got to be the pair of breasts that convinced manly men to do manly things to save freedom. Or get Danny Glover to fight the worst Predator ever.

Anyway, Santos is stone dead, so his sister tracks down Chris Walken, who is now a steel worker, and he gets the old unit back together. And they just follow his lead, even though the jerk got himself captured and never lead them before. But, nonsense is what makes this movie special. A complete disregard for logic is the heart of this movie, and it makes it so freakin' watchable.

All of the old unit have sweet jobs. One of them is a cop, distraught over the loss of his partner; I wonder how many days away from retirement he was. One of them is a doctor who will save lives at any cost, even if they were a crackhead with three bullets in their skull-piece. One of them is a buff bodyguard who doesn't like to protect jerks who steal people's pensions. And, of course, one of them becomes a super rich arms dealer, because, if you are gonna take over a country, you might need more than farmers with pitchforks.

After meeting the old crew, the film goes completely off the rails. Such things as the gang attacking scum-sucking drug dealers for money, a monologue about how hippies going to Woodstock was stupid, the president declaring all new money will be on red, white, and blue paper for no good reason, and Michael Ironside being Michael Ironside are all sprinkled over a nonsensical siege of the capital of Columbia.

Basically, this movie is a hodge-podge of every single ideal and plot-line an 80's action movie ever had. It starts off with a Rambo or Missing in Action style rescue of McBain. Then, it turns into a straight up Death Wish vigilante mission against drug dealers and scum. And then it ends up as a  Commando style raid on an island nation.

And, in between all the greatest hits of 80's action, we have stupid asides. Such things as a German guy and Japanese guy totally being behind the evil president of Columbia (because World War II. Get it? Get it?), the aforementioned red, white, and blue money, the doctor having to read instruction manuals on everything, McBain and crew pretending to be evil Israelis to steal money from the mob, and  Columbian farmers, old women, and children being killed at random intervals so you know just how evil the bad guys are.

Really, I am half tempted to just have a bullet-point list of all the crazy things that happen in this movie. There is not a single sequence that doesn't have something ridiculous happen that makes you fall in love with absurdity. However, in all the insanity, I have a favorite scene. One that stands out above all the rest.

Now, action movies are known to completely and utterly disregard physics. It is why we like them. Or, at least, why I like them. However, this takes the goddamn cake:

McBain and crew are flying into Columbia with all the weapons they done bought with drug dealer/mob money. They are being pursued by fighter planes. One of the planes flies right next to McBain's and demands him to land. Instead of complying with evil Columbian soldiers, McBain pulls out a gun, shoots through the plane window into the other plane, and kills the pilot. Absolutely nothing happens to the plane he is flying in, and they go their merry way.

Now, I am not an aeronautics genius, but I would thing a hole in the window of a plane flying would lead to some sort of issues. But, not in McBain's world. I half expected the pilot to have rolled down the window so it could be like a true drive-by. Only in the air with planes. And that is just a teensy, delicious morsel of the craziness that flows through the veins of this movie.

Surprisingly, I can't really criticize the performances. Everyone is at least adequate, and, well, Chris Walken is Chris Walken, so you know that you are in for. I am not gonna say anyone is believable as a real human being, but they play their stereotypes to the hilt, and that is all one can ask for in a flick about a couple of dudes taking a weekend off to take over a country for their fallen bro.

The special effects, however, are a delight. The blood squibs are fine.The gunfire is believable. However, everything explodes in sparks. It's like everything is made of sparklers. I call it the Power Rangers effect. If you are not like me and didn't watch Mighty Morphin' Power Rangers religiously as a kid, you might be confused. You see, whenever the Power Rangers were even slightly scathed, sparks flew off them like they were made of flint. And the bigger the thing hit, the more sparks there were. Not straight up explosions, mind you, just sparks. Explosions cost too much money, but you can get a shitload of sparklers for cheap at your local convenience store.

All those things aside, what really makes McBain so great is the fact that it has no idea what kind of movie it wants to be. It just throws ideas left and right at the screen, and doesn't care if they stick. It is lazily schizophrenic. It never really commits to one idea or another, but lets them all shine through in a glorious pastiche of machismo and gunfire. Sure, there may be a message in there somewhere, but I'll be damned if they ever tried to push the issue.

And, like I said, it is a movie about Chris Walken and a bunch of buddies taking over Columbia with little to no difficulty. There is absolutely no tension, and that's what makes it work. You never, for a second, think any of the heroes will ever fail. You just watch them being boss for an hour and a half. And, really, isn't that all you need?
Posted by AJ at 1:04 PM