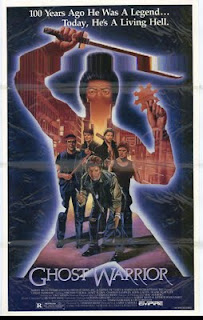 I apologize for giving you nothing on Wednesday or Thursday this week. I had a string of ridiculously bad luck, so, to make up for it, I will give you a review both today and tomorrow. I promise they will both be aces. I couldn't let such a handsome audience like you feel cheated now, could I?

Okay, enough sucking up to my tens of readers, let's get this show on a roll.

Anyway, way back in samurai times, our main man, Yoshi, is straight up schooling some fools for stealing his woman. However, he falls for a dubious trick, his lady gets stabbed, and he falls into freezing waters to never be seen again. I mean, until some sweet 80's scientist decide to bring him back to life for absolutely no reason. Well, unless you count "because the script said to" as a reason.

Yoshi is brought back to life and quickly befriends our narrator/protagonist/eye candy, Chris. She's an expert on ancient Oriental culture. We would only know this because she tells us. She exhibits no knowledge of the subject, admits to not speaking much Japanese, and has to ask an antiques dealer about pretty much everything. I guess being an expert means knowing how to say sake and having sushi this one time when you were in college and experimenting.

Just so you know, I am offering my expertise in ancient Egyptian culture for a small fee. My credentials? I seen, like, fifty mummy movies and this one documentary about how aliens built the pyramids.  Also I know how to dance to that one Bangles song. Hire me.

So, Chris and Yoshi hit it off, but Yoshi straight up despises Chris' boss. Probably because he turns out to be an evil dickbag. Chris is even dumb enough to give the confused killing machine who is frightened and trapped in a hospital his swords. Surely nothing can go wrong. Plus, now they can be the best of buds, and Yoshi can pretend Chris is his dead wife in creepy, pointless flashbacks.

About ten minutes, later, something goes wrong. A stupid janitor tries to steal Yoshi's swords. It doesn't go well, what with Yoshi spreading his stomach open wide with his sweet sword. He uses his newly butterflied captor as a means to escape, where he roams the streets killing no-good punks and also befriending a war veteran who apologizes for WWII.

Surprisingly, the cops take notice to a dude in Samurai gear slicing and dicing people left and right, so they are out to get him. Chris' boss ain't wanna take the rap for bringing a murderer back to life, so he ends up trying to snatch him up before the cops do. Chris totally digs Yoshi and doesn't want to see him dead, so she ends up looking for him. The leader of the no-good punks he killed wants revenge, so he wants to track him down and get said revenge. And thus, the never-ending parade of people trying to find a Samurai, in broad daylight, in the middle of an incredibly deserted Los Angeles begins. And abruptly ends when they all find him at once in what has to be the stupidest third act of all time.


What really makes Ghost Warrior special is that it sneaks up on you. It gets started rather slowly, and the opening showdown is actually kinda well done. Sure, it reeks of low-budget 80's action, but low-budget 80's action is always a nice pick-me-up on a boring Saturday afternoon. Then you hear Chris start narrating, and notice she has a strange inability to emote. Then you see her act, and realize she is just a bunch of goofy facial expressions with no rhyme or reason to how they are applied to the words she is saying; words she is saying poorly, mind you. Then  you go through the bonding sequence and it's like a really crappy The King and I. Then, once the fish-out-of water jokes get staler than the air in Al Capone's vault, the janitor turns out to be a street tough who attacks a trained samurai warrior with an IV pole, thinking this will be a good idea. Then, after Yoshi escapes, it turns into a low-rent Death Wish 3 with a samurai, and you have no idea how it got to this point. However, somehow, you are completely sold on the absurdity that everything that happens next just feels like the only thing that could, nay, should possibly happen. It really is a strange experience. But, I think I am getting ahead of myself.

I have to elaborate more on Chris. I cannot possibly, with my feeble grasp of the English language, even begin to describe to you just how stunningly terrible she is as a narrator, character, actress, and believable human being. As a narrator, she just tells you about mundane things as they happen, in voiceover. What makes it hilarious is there is no real consistency as to when she is gonna pop up and tell you about things you already know are happening, nor is there ever any real need. It almost feels like she was contractually obligated to have x lines of dialogue, and rather than have her fumble up a few lines talking to real people, they had her narrate. As a character, she is even more hilarious. Like I said, she's supposed to be an expert on Asian heritage or some such hogwash, but she ain't know shit other than "samurai like to have their swords" and "japanese people eat rice and drink sake." That is her big, scientific contribution to the big, scientific project of "bring back a dead guy for no discernible reason." The fact that she is also a terrible actress and does not appear to be a real human being are just the icing on the cake.

Her boss isn't any better, either. He's just a dude who becomes the villain because, hey, this movie needs a villain. He actually seems like a pretty righteous dude in the beginning, then an hour later he's trying to inject an air bubble into Yoshi's arm because, fuck, he's too pretty for jail. Furthermore, he's only the villain because the cops are woefully ineffective. They make this huge stink about the police being hot on Yoshi's trail, yet they always show up like 3 months after Yoshi done did anything. Yoshi could hop on one foot backwards the entire movie, and still be several thousand steps ahead of these blundering Keystone Kops. These are vigilante movie level cops, and it is just gut-busting how seriously everyone seems to take them.

The acting not withstanding, what really makes this movie shine is the fact, though I describe it as having one, Ghost Warrior gives up on having a plot, oh, about five minutes in. Then, it is just a bunch of things that happen. There is no solid reason for any of the events in this movie to transpire and logic straight up commits harakiri, yet the film still rolls along like this is perfectly natural. All of these things totally are happening, and you are a fool if you try to figure out why.

There's also the fact that it is so incredibly 1980's it  almost feels like it was dated the second the film was in the can. You got your "lasers can do anything" sequence, your ridiculously over-the-top street gang, and, of course, your straight up tacky clothing. Hell, you know it is the 80's when making a W.A.S.P. reference is actually acceptable, let alone play one of their videos for longer than anyone should ever have to witness. Especially a time displaced samurai warrior. He just ain't got the coping skills hardwired in his skull to deal with Blackie Lawless. Then again, who really does?

But really,  it's the little touches, the little splashes of incompetence or just plain bad decisions, that really elevate this movie above the usual tripe. There are absolutely no subtitles in the movie, which is jarring since the first ten minutes are in Japanese. In fact, the first English we hear is Chris' first stupid narration. It almost gives you the impression that nothing before our lead moron's introduction really matters Even the fact that no one can understand what the hell Yoshi is saying is never really an issue. Sure, it's brought up constantly, but, oh well, maybe if I say English to him really loudly he will get it.

Then there's the entire revival sequence. It starts off with this huge high-tech array of lasers and smoke machines, then it turns into just straight up surgery, completely with grainy, indecipherable medical film cut-aways to show that this is serious medicine. It doesn't help that, though Chris hasn't talked yet, she is intently watching the surgery, complete with downright asinine facial expressions. They are a sight to behold.

However, my personal favorite flourish is the entire sequence where Chris's boss finally recaptures Yoshi, where in we learn that Chris has no idea what a tazer does. Nor does the filmmaker. Yoshi's lack of knowledge of the subject, however, is forgivable. But the real treat comes with the antiques dealer's call to the police. It is downright hilarious, as it not only shows he has a profound overestimation of what the cops know about what exactly is happening in this movie, but it also further illustrates just how incompetent they are. I am not going to spoil it for you, as it is so off the wall you need to witness it for yourself.

Ghost Warrior is a movie that I have seen playing for years on any fledgling network in dire need of content. I really can't explain what exactly its staying power is. It's that kind of movie that could easily fill the gap between 3 and 5 AM where you really don't wanna have to shell out for various reruns of Law & Order or NCIS. It's the kind of movie you only ever pay mind to or watch when there is literally nothing else on television and you really don't feel like doing anything else. It is also the kind of movie you thank your sedentary lifestyle for introducing you to.
Posted by AJ at 3:46 PM