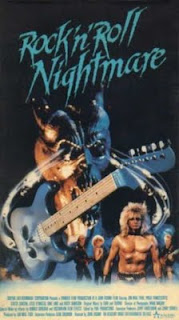 I'm going to let you all in on a little secret: this is the movie I started the entire blog for. Sure, there are a lot of movies I am going to talk about in upcoming entries I may like more. Sure, there are movies that are far more ridiculous than this, and much more campy. But this movie, this movie right here, is my litmus test. If you cannot enjoy Rock N' Roll Nightmare, you are fundamentally broken and I both pity and hate you at the same time.

I pity you because you lack a soul.

I hate you because you clearly hate fun.

Rock N' Roll Nightmare is a vanity project for Jon Mikl Thor. I'll pause for the laughter that comes with those in the know. For those not in the know, Jon Mikl Thor is a former body builder who has a band called Thor. The band, as you will come to learn through this movie, is not very good. Metal lyrics aren't exactly high art, but he makes Bret Michaels sound like Chaucer.

It is also directed by John Fasano, a man who's career I really should do a retrospective of one of these days. The man is truly a gift that keeps on giving. I mean, when you can say you made a movie about evil Asian vampire kangaroos, well, you have arrived, my friend.

But hey, we aren't here to celebrate the careers of Misters Thor and Fasano, just this bullet-point on their collective resumé. And man, the gun that fired it is delightful.

The plot, if you can call it that, is as follows:

A bunch of years ago, a family was murdered by a monster of some kind that was hiding in their kitchen. It started off in their fridge, Zuul style, taking out the mother,  but then the worst prop skeleton ever created popped out the oven to take out pops. The child sat on the stairs and screamed, because children are useless.

But who cares about that shit? Thor ain't even in it!

So, flash forward to present day  (80's Canada, so who knows what time that would be in real years) and Jon Mikl Thor, playing John Triton, and his band, Triton, are at a farm that just so happens to be the tiny suburban home we saw people die in. Just telling you right now, don't ask for continuity in this film. They are there to rock out, have sex with the ladies they brought with them, and maybe fight some monsters.

Okay, so replace "fight some monsters" with "get brutally murdered by monsters." Same difference. Plus, those characters aren't THOR!

Over the course of the movie, there's a lot of nudity, truly awful (but incredibly catchy) music numbers, and the most unappealing sex scenes ever filmed. I'd love to say there was a lot of gore, but the special effects are laughable, yet, surprisingly light on the blood.

And then there's the ending, which I refuse to spoil for you. With about fifteen minutes left, the whole movie goes completely insane. At first, it just turns into a slapstick comedy for no good reason, but that's just minor turbulence compared to the nosedive into the surreal and absurd this movie takes. It just takes your breath away, and it is done so incompetently that you immediately have to watch it again.

I must have seen the ending of Rock N' Roll Nightmare about 50 times now, and it is never not hilarious. Hell, just before writing this review, I watched it another 4 times.

What really makes this movie so special to me is that, across the board, nothing is done right. Absolutely nothing, unless you count "turning the camera on" as an accomplishment. The script is cheesy as hell, with two of my favorite lines ever uttered in a completely serious manner:

"The scream sounded like it was coming from down here. But, you're right. Let's go check upstairs."

"I'm sorry. Whenever I see you doing something so domestic, my boner can't help itself."

Actually, that second one isn't so bad. I am gonna try it next time I grope a waitress.

What makes the dialogue even more hilarious is the fact that no one, and I mean absolutely no one, in this film has even the slightest hint of acting talent. Think of the worst acting you have ever seen. That performance is Laurence Olivier compared to the cast of Rock N' Roll Nightmare.

Two of my favorite acting choices:
- Thor tends to pause in the middle of every sentence for no good reason.

- The British guy who is sometimes Australian completely forgets to have an accent half-way through the movie, and no one seems to notice or care.


But, like I said before, continuity is not a thing this movie cares about. I mentioned the barn/house. But that's the tip of the iceberg. Canadian accents will slip in out and out dialogue. People will wear multiple outfits in the span of a single scene.

And, man, don't get me started on the costumes. Some of them are fine for an 80's metal band, but that polka-dotted tablecloth pants suit that Thor wears while performing Energy is a sin. He looks like the lovechild of Murphy Brown and He-Man. And their manager in the film totally rocks a jacket proclaiming him to be a member of the Archies. I like to think that is the other band he manages.

Triton and the Archies. Now that's a goddamn track record right there.

However, stilted dialogue and painful outfits cannot top the amazingly bad special effects in this movie. You'd think, or at least hope, maybe even pray, that in a flick like this, at least they'd go all out on the special effects. They don't. At all. Not in any way, shape, or form.

The monsters in this movie are hilariously unconvincing. And, in one scene, where they are supposed to be "attacking" Thor, you just know it is just a guy off camera throwing the monsters at him. Look closely, and you'll see him struggling to catch them. It is actually less convincing than just seeing the string.

Which, of course, you will.

Really, this whole thing is a dazzling portrait of incompetence, and it is goddamn hilarious. There is no reason this movie should've ever been made. None whatsoever, but I'll be damned if I don't find myself laughing the entire time, especially during the last 15 minutes. You just gotta believe me on this, it's better if you don't know what happens. You'll thank me.

And, for an added bonus, here is the song Energy, as performed in the film.

It will be forever stuck in your head.