PLANET OF THE VAMPIRE WOMEN 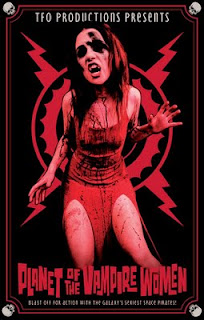 So I just woke up from a nap to write this here review for a little film called Planet of the Vampire Women. Why did I have to take a nap, you ask? Because my mind was so exhausted from getting thoroughly blown.

If any of you are ever in the area, you should stop by and tell them that AJ is still shamelessly promoting them. And that they should give him a medal of some sort. Perhaps a gold covered taco. Bejeweled in sapphires. Covered in hieroglyphics. Hieroglyphics that are also made of sapphires. Also, I want a pony.

I guess you could also enjoy their movies and wares, but I really want that pony.

But hey, let's get to the actual review.  I mean, that is what you are here for, right?

Planet of the Vampire Women is a movie that somehow takes everything anyone could ever want in a movie, boils it down to take out the excess character development and sappy bits, and then splatters it on the screen with such care, you can't help but be enthralled.

It is the timeless story of sexy women who get topless at the drop of a dime and also own a cyborg that are also space pirates that, after robbing the shit out of a casino, crash land on a planet where getting struck by lightning turns you into a vampire and also getting bitten by a vampire turns you into a vampire. Oh, and there's a cop chasing him, that, in an unforeseen turn of events, also crash lands on the lightning vampire planet. And the lightning vampire planet is filled with kooky monsters that wanna destroy them. Also the space pirates have an old man doctor who is a drug addict.

I am sure you are all familiar with this standard tale.

Really, the plot of the movie is not very important. I will give it that it is more complicated than my totally sweet synopsis and that it is incredibly fun, but really its just a backdrop for the wackiness that the TFO cats do like no one else.

I gotta discuss the cast first and foremost. Everyone from the chubby casino security guard to MC on stage during the climax is completely unique and fun to watch. Its got shades of Jesus Christ: Vampire Hunter in the way that no actor is ever wasted. Even the lowly extras are a blast. They are a hoot to watch as they do their thing and try to steal the scene from each other at every turn.

There are, of course, a few standouts:

I absolutely loved the girl they got to play Ginger, Liesel Hanson. It helps that she totally reminds me of Lambert from Alien. You know, the put upon pilot played by Veronica Cartwright? In fact, I came to call her "not the chick from Alien." This is not an insult. I had to keep reminding myself that it wasn't her, because I could just picture her being totally flustered with Sigourney Weaver every time she spoke. She just wants to fly the dang spaceship and get off the death planet, already Ripley. Why you gotta make everything so difficult with your dang chestburstin' aliens?

Next up is  the pleasure clone Astrid, played by Stephanie Hyden. I am having trouble putting to words just how delightful she was to watch. Every little move she made was just cheery and fun. Like she existed in a frilly, spunky Disney fantasy movie with talking squirrels and a dragon that doesn't eat virgins, but instead makes lollipops. Yes, so she's like a Disney princess -- who also bangs people for a living and wears sexy outfits. I guess this counts as a Walt Disney sex dream? You know, minus all the racism.  In fact, I think she should put that on her resume. She'd get all the movie offers. Just be sure to include the racism bit. Hollywood is fickle about the 'cism.

And, lastly, is my man Stephen Vargo as Doc. I love this dude. It is well known how much I dig on this dude's style. He is just so dang fun to watch it is unbelievable. He is an old school scenery chewer, and goddamn if it isn't a delight to watch him deliver a soliloquy to a bottle of cognac.

I don't want to slight anyone I didn't mention up here, because everybody was damn fantastic. It is rare to have a cast that is so much fun to watch, but I reckon it was because you know they were all having a ball makin' this flick.

The sound design of the film is aces, too. I loved the soundtrack so much as it was a fusion of 50's schlocky theremin music mixed with the kind of stuff saved for epics on the scope of The Lord of the Rings. It gave a neat feeling that the soundtrack took the movie more seriously than the movie itself, and I loved it for that.

I did have some trouble in the early parts hearing the dialogue, because the music was hella loud at times, but those bits were few and didn't cover up any of the real corny masterpieces.

However, the real star of this movie is production design. Everything just oozes style.

The sets themselves have a straight up Dr. Caligari feel. You can tell they were working with a small soundstage, and furthermore, they didn't care if you knew. I mean, why have a giant set when you have a smoke machine? Radical, German-expressionist style painted alien planets mix with kitschy, cramped spaceship interiors in such a delightful way. It really makes the planet look completely alien and the spaceships look more like space Chevettes.

The creature design is even more delightful. They are the love child of The Krofft brothers and Gwar, and I mean this in every good way possible. The space bugs and the space monsters are just a blast to look at, are not even remotely concerned with being convincing, and just add to the aesthetic of a movie already packed to the brim with insanity.

This is the first TFO movie to really go balls-out crazy with CGI. Now, for most folks, that'd ruin everything and make it take a sharp left into Made-for-Syfy territory, but not Planet of the Vampire Women. No, sir. Instead of just poorly replicating things they could not do on their own, everything has this neat, 1992-esque blockiness to it. Things even explode into tiny little blocks, and it is just plain ridiculous looking. They know you know it is CG, so why not have some dang fun with it?

And that, my friends, is why this movie is so very much so worth your time. They are 100% aware they are making a movie, and have no qualms showing the string on a monster or having incredibly cheesy looking sets or even having the least convincing CG known to man. It's all in good fun, and it's campy as all get out.

Normally, I wouldn't review a movie that is aware of how campy it is for this blog. Then again, how can I say this when it is the first review I have posted? But really, this movie struck a chord in me, and I can't stop singing its praises.

It is just so much friggin' fun.