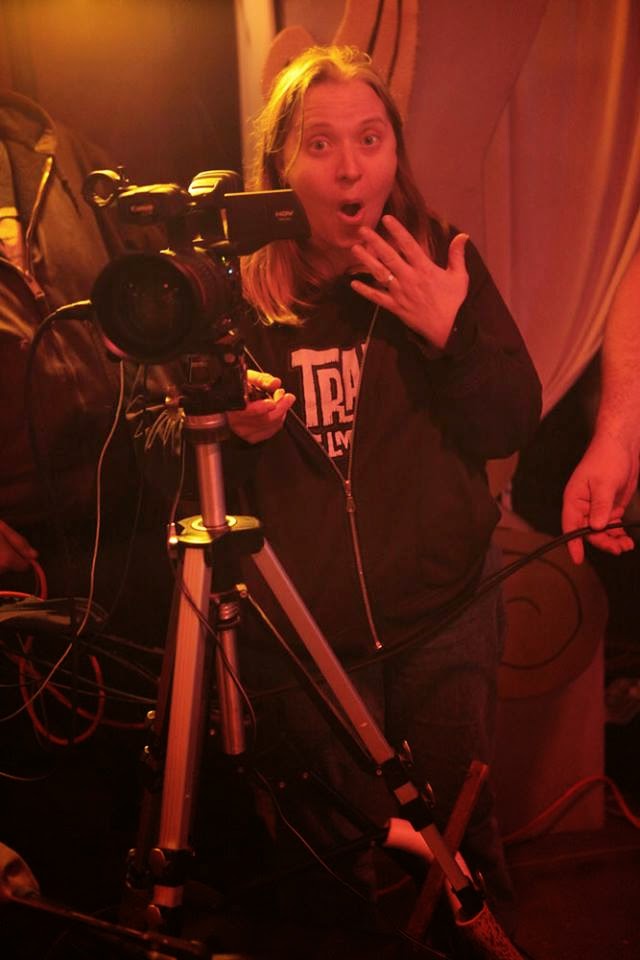 Alright, so this interview is 100% nepotism, as I've known Christy pretty much a third of my life. But, she's kind of one of the coolest people around so whatever. If you think I have any shame, you haven't seen how I track down half these interviews.

This is also the first interview I conducted and hadn't quite found my groove, so all the links I usually throw up here in the intro would be redundant as heck. I will say that on December 5th, if you are in the Sacramento area, you owe it yourself to make it out to Miss Trash Pageant. Not only will it a great time, but it will help support independent film making!

Okay so, tell me a little about who you are, what you do, and what you got in the works. Let's start with all the shameless plugs we can.

Darin, my husband and art partner (director, writer, etc.) does a lot of the set design ideas...like the hard angles in carvings or stone columns (we always seem to have some sort of Evil Lair). I do more of the color work and light stuff. Amy, our other partner, generally does the costume stuff. We do all get together and talk it out before hand. I tend to light very boldly...bright colors, harsh angles, stuff like that, so we take all those things in to account ahead as well.

I remember telling you the sets for Planet of the Vampire Women (trailer here, for sale here.) were like a technicolor Cabinet of Dr. Caligari, so it's cool to know you had that plan all along.

Ha! That's an excellent compliment,. Thanks! We watched a lot of Star Trek and Mario Bava movies to prep for that.

I could see that. The kooky sixties Star Trek planets definitely were represented. Now, you guys are fiercely independent, and I think of TFO Productions as the West Coast Troma. At least, that's how I sell it.

So, how does a project happen for you guys? Where does it start?

With the story. Darin writes scripts and before we start a new project, we get together and decide which script is going to be the most feasible and then we figure out how to make it happen.
Kinda like magic, but with way more hard work.

Are you constantly coming up with new story ideas?

Yeah, but you can only do so many at a time. Gotta keep the focus

Trust me, I've tried juggling a bunch of balls all at once before, I understand. Now cast and crew has got to be interesting for you guys, as before your first picture you already had cred with running the festival for years. Still, how is a typical TFO Production staffed?

Exactly. We already had a good gang of people from the film fest before we started doing the films so we had a base. Before every project, though, we do auditions. This is always fun. We meet a lot of new people and some of them are always amazing. A lot of times, we get actors that we may not use until a later project, too. And a lot of the folks, whether we have them in the films or not, will do the film festival (we have games and freaks and stage shows) or become part of the crew. Our stuff is mostly volunteer, though, so we do have a lot of people leave the gang and new ones come in. We do have a lot of folks who have worked with us for many years, too. They're the best!

And here's the part where I say we've been friends forever and I still haven't made it down to the festival because I'm the actual worst.

Well you DID live like 2000 miles away until recently. And you're still pretty far, dude. It's legit.

I know. Full disclosure's gotta work both ways, though. Alright, so I think we've had enough boring questions. Let's go to the fun bits. Being super independent, money is very much a hurdle to overcome. You guys do a lot of fund raising to get these movies made. What's the most ridiculous thing you've done to raise money for a film? 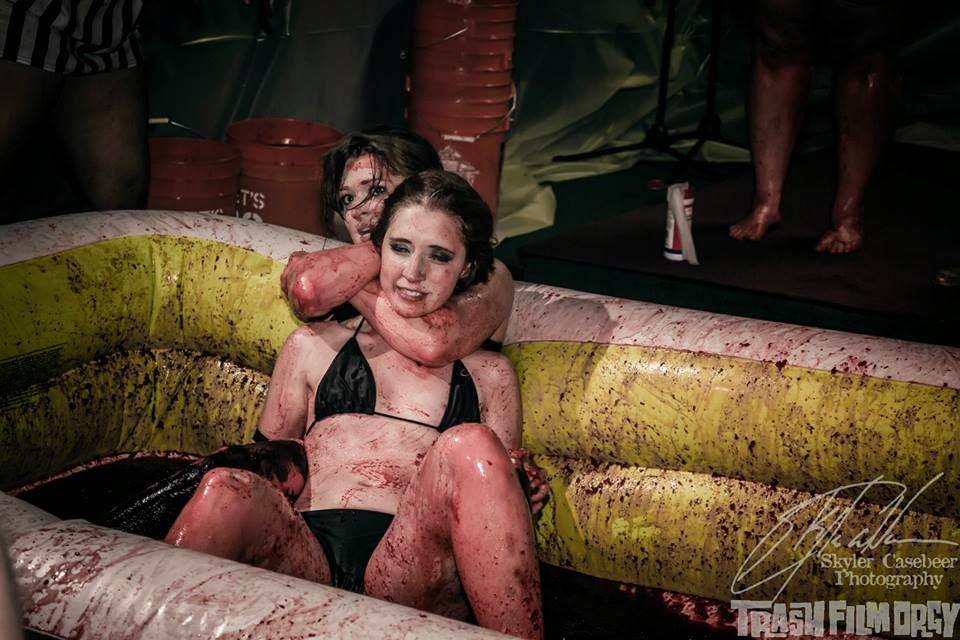 Every time I see pictures of that I wonder how that hasn't become a thing at all the major horror conventions. It's brilliant!

It does happen, though. We're definitely not the first ones to think it up.

I know. I just want to be able to go to a hotel in New Jersey and get handed flyers for it a couple times a year. I need more blood wrestling. I have a problem.

Yeah, flipping and flopping around in that stuff, I can only imagine. Now, back to budget stuff. The reason I love indie/direct-to-dvd/made-for-tv genre films so much is all the crazy problem solving that goes into every scene. So you gotta have a bunch of stories of how you cheated an effect to make a scene work. And I want all of them. Because I'm greedy.

Oh god. Microbudget filmmaking is ALL creative problem solving...I don't even know where to start...

As your friend it is my job to put you on the spot like this.

Hmmm... On Monster from Bikini Beach's (which you can watch in its entirety here) third day of shooting, we were coming back from shooting about 40 miles or so out of town at a friend's pond. We're coming home at like 2 AM and the monster falls out of the back of the truck on the freeway. TOTALLY DESTROYED!

Oh God. I can't even imagine. I gotta ask, though. How'd you fix it?

He was waaaayyyy beyond fixing. Just random scraps salvaged from the side of the freeway.
We had to make a totally new one. It caused us to have to push back all the outdoor shoots like 5 months or something because of the season change. We started in September, but by the time the new monster was made in November, there were obviously winter trees.

It seems like time is always the enemy in micro-budget films. Well, another one.

Time and money. Always one or the other. Like, on the new movie, we're a year or more behind schedule, but we are at only half our original budget. Less money often equals more time

I can only imagine. Speaking of the monster costume from Bikini Beach, what I've always loved is that you guys still use practical effects for pretty much everything. I know you did go partially digital for Planet of the Vampire Women, but, are practical effects always going to be your go to?

Probably at least partly. In the new BADASS movie, we have almost all CGI backgrounds, but almost all practical gore effects and monsters. And dudes in suits. And chicks in suits, too.

Well, that sells me completely.  Okay, I'm going to make you explain shaggy elephant in an official capacity. So, what's the deal with shaggy elephant?

[EDITOR'S NOTE: Shaggy Elephant is an in-joke that I am not in on from the out-of-print first film from TFO productions Curse of the Golden Skull and has confounded me for years. I am including this to show you how low this dumb white whale has taken me]

I don't think I'm allowed to elaborate on the Shaggy Elephant right now. Just think of him as a sort of mascot for now.

And here I thought I could trap you with my press credentials.

It was pretty smooth, dude. I totally almost fell for it.

Alright, let's do some rapid fire questions and wrap this up since I'm sure you got better things to do than answer a bunch of silly questions. Favorite film genre?

Darin and I worked the polls at the 2000 election. That was HORRIBLE!!!

Well, you at least got to be part of history!

Ugh. Luckily, it was only one day

What makes the perfect action scene?

Fights, titties, fast cars, monsters and explosions! And by fights, I do mean knife fights

And there you have it. An interview that was all a ruse to try and  trick my friend into explaining a nine-year-old joke to me. If that ain't the Camp Counseling spirit distilled, I don't know what is.
Posted by AJ at 12:00 AM